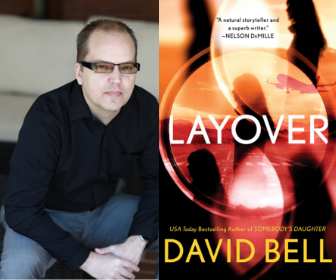 A couple sharing a passionate kiss in an airport isn’t all that unusual—but what if they are strangers? What if they part ways, never to see each other again? Most airport people-watchers would’ve written this encounter off as a Hallmark moment. Dr. David Bell saw it as inspiration.

“Like any writer, I find inspiration wherever I can,” said Dr. Bell. “Real life, observations, news stories, things that happened to me or my friends, and things I just make up. Usually it’s a combination of all of those.”

The lead character in Bell’s most recent novel, Layover (2019), is Joshua Fields, a businessman who whiles away his life in arrivals and departures, in hotel rooms and airport terminals. One day, the monotony is broken. A beautiful stranger in line at the airport gift shop introduces herself as Morgan, and Joshua feels an instant connection with her. Brushing off his usual routine of updating his girlfriend on his flight status, Joshua instead has a drink with Morgan at the airport bar. Morgan is aloof, mysterious, and charming. She leaves suddenly, kissing Joshua passionately before disappearing. Joshua believes he will never see the stranger again until she appears on the news as a missing person. Bell spun a masterful web of lies, secrets, and mystery. Like all of Bell’s other novels, Layover keeps readers on edge.

Layover’s secondary character, detective and single mother Kimberly Givens, struggles to balance her recent divorce and a much-deserved but twice-denied promotion. Givens’ character is relatable and provides a sense of grounding to Joshua and Morgan’s tumultuous relationship.

Inspiration for the characters were drawn not only from Bell’s real life experience in an airport, but from Bell’s friends as well. “Much of Layover takes place in airplanes and airports and I was fortunate to have a friend who runs an airport in Michigan,” said Bell. “I was able to get a tour of the entire place, including the police facilities in the airport. I also know someone who is a former police officer so I can always ask him questions about police procedures.”

Layover is a product of Dr. Bell’s experiences, relationships, and imagination, but most importantly, Layover is the product of almost twenty years of writing experience. Bell’s writing was first published in 2002, and he went on to write eleven novels, including The Condemned (2008), The Girl in the Woods (2009), Cemetery Girl (2011), The Hiding Place (2011), Never Come Back (2013), The Forgotten Girl (2014), Somebody I Used to Know (2015), Since She Went Away (2016), Bring Her Home (2017), Somebody’s Daughter (2018), and now Layover in 2019. Bell’s body of work includes similar themes, though they all stand apart from each other. “I write a lot about families and the ways we are forced to choose between our obligations to others and our own desires,” said Bell. “I also write a lot about the way things from the past come back and haunt us in the present. The past is never really gone.”

When asked which of his books is his favorite, the answer was “Layover, of course.” Layover is the culmination of his writing career at this time, setting the novel apart. “As a thriller writer I’m always trying to write a leaner book,” said Bell, “and I think Layover is the leanest and most efficient of them all. I hope I’m getting better at that.”

Bell has also perfected his method of writing, successfully publishing a novel almost yearly. Maintaining such a high standard (and volume) of work takes dedication, time, and avoidance of distractions. “Anyone who wants to be a writer has to be able to compartmentalize their lives and be disciplined about getting the work done,” said Bell. ”There will always be things diverting writers from getting their work done, so writers have to be able to push those things aside.”

Bell noted that his biggest distraction from writing is the internet, describing it as a “killer,” and a “massive time suck.” Bell’s biggest obstacles are harder to solve. “How do I keep surprising the reader? How do I keep the reader off-balance so they want to keep turning the pages in order to learn more?”

When asked if he always wanted to be a writer, Dr. Bell replied, “I was always a reader. It took a long, long time before I was willing and able to put words to paper and then be willing to show them to other people. And then it took even longer to get published. Writers need to be patient.”

For more information about Dr. Bell’s writing, visit his website.