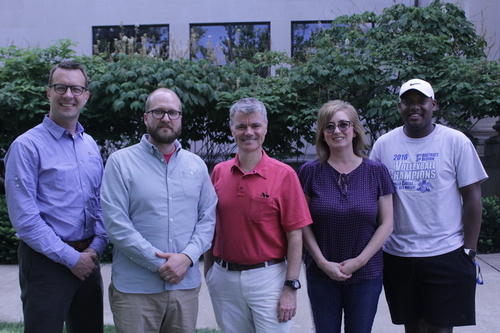 On July 9th, the English Department held the inaugural meeting of its new English Department Advisory Council (EDAC). The council will help the department foster strong relationships with alumni and friends, strengthen outreach to the communities it serves, and gain additional perspectives on its programs. EDAC will also promote “the value of an English major,” said Dr. Rob Hale, head of the department. “The study of English can lead to a variety of successful and rewarding careers, and, even more importantly, a rich, meaningful life.”

EDAC consists of an array of alumni, professionals, and community members. The inaugural members are Caleb Ernst of Larue County, KY; Sam Ford of New York, New York; Rachel Hoge of Nashville, TN; Joseph Kirkpatrick of Bowling Green, KY; Quinton Owens of Greenville, KY; Sam Plappert of Louisville, KY; Wade R. Stone of Glasgow, KY; and Allison Gardner Willian of Bowling Green, KY.  Sam Ford will chair the group; Allison Willian will serve as Vice-Chair; and Caleb Ernst and Quinton Owens will work on the Executive Committee.  Faculty nominated council members, and the English Department Outreach Committee selected the finalists. This process resulted in a diverse and multi-generational council with experience in education, publishing, creative writing, advertising, healthcare, and business. “The diversity of the group reflects the diversity of work our alumni do,” said Hale.

Sam Ford, EDAC Chair, commented, “The analytical, argumentative, creative, and communicative skills built through a degree in English can help students find greater success in their professional, personal, and civic lives. Our council will advise the English Department on how to continue serving its diverse alumni base, bring the knowledge of our alumni to current students, and demonstrate the value of studying English to prospective students, potential employers, and residents of the region.”

At the inaugural meeting, the group made preliminary plans for an English Department alumni gathering for homecoming weekend.  Dr. Hale noted that the goal of the event is “to re-connect with our graduates.  Many of our alumni want to help our department, but we need to make it easier for them to know how.  The council sees this social event as a first step in building some wonderful relationships with our graduates and friends.”

Eventually, the network the council helps create will help the department develop more placements for the English internship program and create opportunities for community members and alumni to speak to English majors about career opportunities and the value of an English degree in their fields.

Dr. Hale created the council knowing member’s advice will improve the department. “It's important for academic programs to have external sources of information about their programs. The first EDAC meeting exceeded my high expectations.  The group supported the fine work that is already occurring in the department and provided some fantastic ideas for how we can make the department even stronger.”

Current members include the following alumni and professionals:

Caleb Ernst teaches Advanced Placement Literature and Composition and Junior English at Elizabethtown High School in Elizabethtown, Kentucky. He attended WKU from 2006-2010, graduating with a BA in English and Allied Language Arts. He returned to WKU for an MA in English Literature, completed in 2018. He is from Larue County, Kentucky, and lives there with his wife Kayla, who is also a WKU English Department alum and English teacher.

Sam Ford is currently the Director of Cultural Intelligence at Tiller Press, Simon & Schuster, a CBS company; as well as a research affiliate with MIT Comparative Media Studies/Writing, and a Knight News Innovation Fellow with the Tow Center for Digital Journalism at Columbia University. Ford is a 2005 WKU English Department alum. Ford was born and raised in McHenry, KY.

Rachel Hoge is the Production Editor of Post Hill Press, an independent book publishing company based in Nashville, TN, close to her hometown of Springfield, TN. As a freelance writer, she has been published in The Washington Post, The Guardian, Salon, and more. She graduated from WKU with a BA in Creative Writing in 2014. Afterwards, she graduated with an MFA in Creative Writing at the Arkansas Writers' Workshop. “I'm a huge believer in academia and higher education, and received a vital foundation of English studies during my time at WKU,” said Hoge. “I'm honored to be an inaugural member of the EDAC.”

Joseph Kirkpatrick is the founder and President of KirkpatrickPrice, a certified auditing firm, specializing in information technology and cybersecurity assessments. 22 employees of KirkpatrickPrice are graduates from WKU, most coming from the English Department. Beginning in 2017, the firm sponsored the Professional Writing club, which seeks to introduce students to the many career opportunities available to them. Kirkpatrick was born and raised in Tompkinsville, KY.

Quinton Owens teaches high school English at Apollo High School, in Owensboro, KY. He earned his BA in English and Allied Language Arts with Teacher Certification at with the WKU English Department. He grew up in Greenville, Kentucky, located in Muhlenberg County.

Sam Plappert is the Associate Creative Director at Power, an ad agency in her hometown of Louisville, KY. She graduated from the WKU English Department in 2008 with a BA in Literature and minor in Creative Writing, before going on to earn her MA in Rhetoric and Composition from Ohio University. In her current role, Sam does everything from writing copy for print ads to directing video projects to pitching ideas to clients. At home, she spends every ounce of her energy raising two kids, which has led her to a new and unexpected hobby: gardening. “I am doing pretty ok at keeping two humans alive,” said Plappert, “so I am determined to learn how to keep green things alive, too.”

Wade R. Stone is the Executive Vice President at Med Center Health in Bowling Green, KY. Stone earned a BA in English and an MA in Public Administration with a concentration in Health Policy from the University of Kentucky. During his time in college, Stone also spent time on WKU’s campus, most notably for Academic Camp (SCATS). “My English background has been instrumental throughout my career development,” said Stone. His must-read list includes author Wendell Berry, The Grapes of Wrath, and To Kill A Mockingbird. He and his wife Melissa live in Stone’s hometown of Glasgow, Kentucky. They have three children.

Allison Gardner Willian is the Strategic Account Manager for Essilor Labs of America. She is originally from Munfordville, KY. She graduated from the WKU English Department in 1999 with a BA in Englisha and Allied Language Arts and earned an MBA in 2012. She was a student in Dr. Ted Hovet's first Film Studies course, and has supported the Film Club and Film Major in recent years.