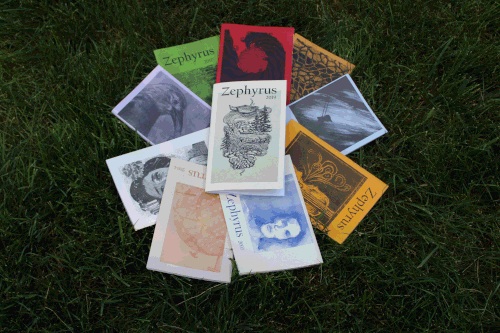 Zephyrus is a fine arts magazine published annually by WKU’s English Department, showcasing student artwork, poetry, and short stories. The magazine was first published in 1956 when a handful of WKU English majors felt the English department was missing an artistically oriented magazine. The students who founded the magazine originally called themselves The Western Writers, and they titled the magazine Voices. The first edition of Voices was a collection of student works mimeographed and stapled together, and was initially distributed among English majors before distribution eventually expanded across campus.

The Western Writers soon applied for and received department funding. After securing funding, The Western Writers changed the name of the magazine to Zephyrus to emphasize the publication’s strong connection to WKU and the English Department.

Zephyrus, the Greek god of the west wind, was one of four seasonal Anemoi, or wind gods. While Zephyrus is god of the west wind, he is also considered to be the god of spring, the husband of greenery, and the father of fruit. As Western Kentucky University, we can be considered a western wind, perhaps of change or ideas. Each new edition of Zephyrus is published in the spring, and the magazine showcases the metaphorical fruit of our students’ artistic work. Each new edition of Zephyrus contains lush poetry, immersive short stories, and raw artwork.

Submitting work to Zephyrus is a great opportunity for students to be published, build their portfolio, and experience what it’s like to be a part of the publication selection process. Dr. David LeNoir, the current faculty advisor for Zephyrus, states “It’s a good avenue for students to experience publication. For many undergraduates it’s the first publication they have been published in, and the submission and selection process largely mirrors the real world. You submit things, and you’re either selected or rejected, or you have to revise it. Fortunately, we don’t ask for revisions often because we have such good writers.”

As well as providing an opportunity for publication and recognition of exceptionally creative, student-written work, the magazine also provides a sense of community.

Students who are published in or read Zephyrus become aware of like-minded peers. “It’s a very good way for students to show their work, but also to make connections,” said Dr. LeNoir. “If you admire a piece of writing and you realize that the author is in one of your classes, that’s a talking point and you should introduce yourself. If you see them writing something familiar to you, then you have something in common,” he added.

The relatability of Zephyrus and the community it serves is what makes the magazine unique. When students read work written by their peers they can relate to it, laugh or cry to it, or find it to be beautiful. The Zephyrus publication demonstrates that English work at WKU comprises not only academic essays and in-depth literary analyses, but also creation. Student work in the English Department simply revolves around English, whether it is creating a beautifully worded dissertation or crafting a beautifully worded poem.