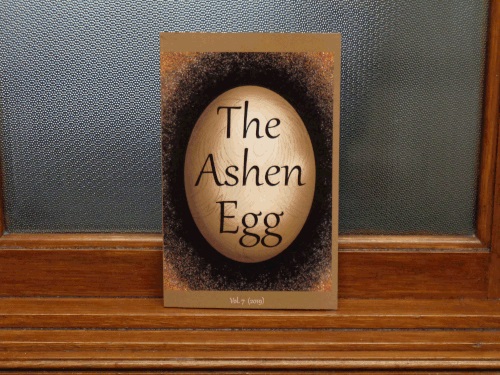 The Ashen Egg is an annual journal written by the WKU English Department showcasing undergraduate essays on literature, film, rhetoric, English pedagogy, linguistics, and popular culture. Although The Ashen Egg is in its seventh year of print, not many people know the origins of the publication.  The first edition of the journal was published in the wake of a debilitating fire set in Cherry Hall. In late April of 2006, several juveniles led a siege upon faculty offices in the building. Pages from WKU’s newspaper, The Herald, were scattered around offices and stuffed under doors before being set ablaze. The arson caused extensive fire, water, and smoke damage, resulting the right wing of Cherry Hall being inaccessible for part of that semester and the rest of the summer. The damage was so severe that all of the walls had to be re-plastered, and some faculty office floors and doorways are still marred with scorch marks.

After such an intense attack upon the faculty and students, the English Club adopted a new logo of a phoenix rising from ashes. When brainstorming ideas for the cover of The Ashen Egg, the English Club’s logo of a phoenix was paired with an egg, which is a metaphorical symbol of a writer’s work. From then on, The Ashen Egg has remained an example of the students and faculty of the WKU English Department overcoming adversity, only to create something new and academically beautiful from the conflict. Not only is The Ashen Egg a symbol of the perseverance of writers and the department, the journal is also a source of pride and accomplishment for students and faculty.

Publishing student-written essays provides exposure for students with exceptional writing skills and examples of academic work within the department. The essays featured in The Ashen Egg are a product of hard work and academic skill on behalf of the students. By publishing these essays of high academic quality, the English Department is able to express how rewarding and important the students’ work is, as well as a bright outlook in the face of past adversity.

Being published in The Ashen Egg provides undergraduate students the opportunity to build their portfolio and resume and offers an opportunity for guided revision, strengthening the students’ writing skills.  Cameron Fontes, a sophomore and Creative Writing major from Louisville, Kentucky, contributed to the seventh volume of The Ashen Egg with his essay ”Heavenly Fathers: Examining the Father Figure in Tracy K. Smith's 'My God, It's Full of Stars.'"

“I was never aware before learning about The Ashen Egg that there were opportunities to publish the kind of literary analytical writing that I did in class. It was very rewarding to see my work alongside others whose essays were each impressive and thought-provoking in their own way.” said Cameron. Cameron also recommends other students submit to The Ashen Egg. “Even if it doesn’t end up getting published, you still go through a very rewarding revision process that will serve you well in and out of class going forward.”

This year marks the seventh volume of The Ashen Egg, and features essays by Ann-Meguiar Bouldin, Thomas Deaton, Cameron Fontes, Rachel McCoy, Dillon Miller, Samantha Newman, Granite Pare, Chance Peterson, Savannah Rogers, and Adrianna Waters. The English Department is proud of these essays, and recognizes all of the hard work and academic study these students upheld.

Clich here for more information on The Ashen Egg.

Three Chinese Flagship Students were among the 21 WKU students to earn a Gilman Scholarship. Congratulations to Joseph, Mandy, and Vivian!

The Kentucky Museum is thrilled to announce the opening of "Whitework: Women Stitching Identity," an exhibition of whitework quilts and coverlets curated by renowned quilt scholar Laurel Horton.

For a project in the spring 2021 Survey of British Literature I course, senior Aliza Norman wrote and performed a song rendition of 12th Century Marie de France’s “Lanval.”

For a project in the spring 2021 Survey of British Literature I course, senior Aliza Norman wrote and performed a song rendition of 12th Century Marie de France’s “Lanval.”

WKU MFA alumna Erin Slaughter recently announced that her debut story collection A Manual for How to Love Us will be published by Harper Perennial in summer 2022.