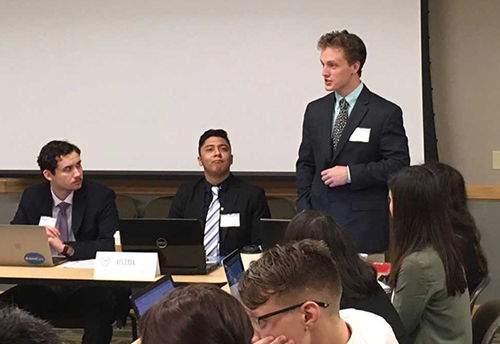 For the third year in a row, WKU’s Model Arab League team was recognized at the regional conference at Shawnee State University in Portsmouth, Ohio. The conference consists of three days of intensive negotiation and policy making, simulating the workings of the League of Arab States, headquartered in Cairo, Egypt. Senior Noah Stevens, an Arabic and International Affairs major from Elizabethtown led the sessions of the Council on Political Affairs and was recognized as the Distinguished Chairperson of the conference.

Senior Hugh Poland of Clarksville, Tennessee, and Arabic and Communications major who served on the Council on Social Affairs noted that “Being able to participate in MAL was one of the most unique experiences of my college career. You get a chance to represent WKU and compete with other schools as well as branch out and connect with people who have a shared interest in international relations.”

Seniors Maria Riyad, from Franklin, Tennessee and Emma White, of London, Kentucky, both Arabic majors, represented the United Arab Emirates on the Council on Economic Affairs, where they drafted resolutions to tackle issues like youth unemployment, the spread of virtual currencies and banking regulations in the Arab world.

Based on the team’s performance in regional competitions, it was invited to the national conference in Washington, DC, for the second year, where it will compete with teams from across the United States and from the Middle East, during the month of April. The team advisor is Dr. David DiMeo and its participation was sponsored by the Department of Modern Languages and the Dean of Potter College.

Preparations for a New Academic Year