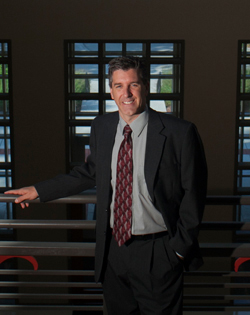 For nearly ten years, Dr. Scott Harris has served as the department chair for the Department of Music. However, beginning in July, he will end his term in this role and become a full-time faculty member.

Before coming to WKU in 2013, Dr. Harris was an applied percussion faculty member at Stephen F. Austin State University in Nacogdoches, Texas. Despite his love for teaching, he became interested in administrative work.

“I went to my department director at SFA and mentioned that I was interested in administration. While I don’t think that anyone sits around the table and says, ‘I want to be a college administrator when I grow up’, I enjoyed that my position had increasing administrative responsibilities and wanted to pursue it further.”

As a result, Dr. Harris served as the Director of Percussion and the Assistant Director for Undergraduate Studies during his 15-year tenure at Stephen F. Austin State University. He also became the Interim Director of the SFA School of Music when the previous director stepped down. The Interim Director position is what caused him to seek out the Department Chair of Music role at WKU.

“As a percussionist, I knew I had a natural, logistical skill set that could be applied to a higher level. When I found this role at WKU, I instantly applied and the rest is history.”

Reflecting on his time as a department chair, he appreciates that this position enabled him to foster meaningful relationships with offices and personnel across campus and within the community. Additionally, he values that this position granted him the opportunity to oversee everything going on in the department.

“Being a department chair has allowed me to get to know everyone in the department. While I don’t know every student, I am broadly involved with what every single student is doing in our department. As a faculty member, you tend to live in your singular lane, but, as an administrator, you have a wider lens. It is a real joy to see what everyone is doing.”

Stepping back into a faculty position for Dr. Harris has its perks, though. He looks forward to the direct, individual engagement with students and spending time outside with the marching band and drumline students.

Starting July 1st, the new department chairs for the Department of Music will be Dr. Liza Kelly and Dr. Zachary Lopes.

Dr. Liza Kelly is a professor of music and the director of opera theatre in the Department of Music. She also founded the Western Kentucky University Opera Outreach Program. This program has toured numerous elementary, middle, and high schools to teach students about the importance of opera through interactive workshops and performances. In addition to her duties in PCAL, she also serves as the stage director for the Schmidt Vocal Institute at Miami University in Oxford, Ohio and is an active performing artist.

“Dr. Kelly is incredibly innovative and creative. She has a genuine ‘what can we do differently’ mindset that comes naturally to her,” says Dr. Harris. “Her mentality keeps artists engaged and allows unique perspectives to shine through. She will be outstanding in this role and will keep the art school vibe alive in the Department of Music.”

Dr. Zachary Lopes is an associate professor of piano and music theory in the Department of Music. During the brunt of the COVID-19 pandemic, he also served as the Audition Coordinator for the department. He is an active pianist who has given performances and masterclasses in the United States, South America, and Europe. He has previously held teaching positions at Wittenberg University and the University of Cincinnati College-Conservatory of Music. Additionally, he served previously as the Assistant Administrative Director of the CCM Prague International Piano Institute.

“Dr. Lopes and I came to WKU around the same time, so we’ve followed the same veteran status every year,” says Dr. Harris. “What I saw in Dr. Lopes was a similar experience to me. As he grew into his position, I saw him show interest in administration. I look forward to seeing his career in administration flourish.”

While Dr. Harris looks back fondly on his time as the Department Chair of Music, he has complete faith in Dr. Kelly and Dr. Lopes’ leadership.

“Dr. Kelly and Dr. Lopes are phenomenal musicians and leaders. I am certain that they will both bring unique sensibilities to their roles. I am excited to see how they continue to grow and revolutionize the department.”