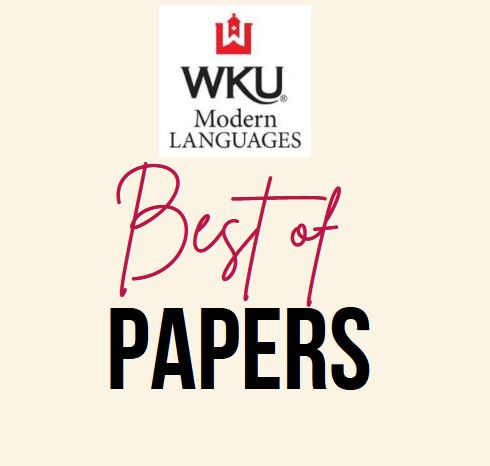 In the Department of Modern Languages, students work hard to become proficient users of a second language. Achieving this goal is difficult in and of itself, but even more challenging when considering that most students have a second major, work between classes and on weekends, and are active in campus organizations. We’d like to congratulate all of our students for being able to balance these demands. In spite of them, students regularly produce outstanding results. Faculty were asked to select student work that highlights student excellence. Of course, many projects and papers could be highlighted, and the works below provide a snapshot of the many great things which took place during spring 2022.

In Arabic 200, Emily Arnold examined modernity within her paper “Informal Modernization of the Arabic Language: A Catalyst of Nationalist and Globalization-Focused Ideological Change.” In Spanish 372, Lauren Varner produced a final exam essay focused on the contributions of Hispanics in the United States in three areas: science, arts, and literature.  It also highlights the new perspectives and diversity these contributions offer to the fields themselves and the people living in the United States. In Spanish 371, Carli Street wrote about the challenges of standardized testing in “La Nocividad de las Pruebas Estandarizadas.” In the same class, Ashley Austin examined reducing gun deaths in “En Control: Cómo Menos Armas en los Hogares Pueden Salvar Vidas.” Spanish 101 student Cassandra Davies explored Mafalda, a Latin American comic strip character in "Las ocurrencias de Mafalda." Abigail Yarborough and Gwendolyn Lamb, two students taking Chinese Flagship 102, created a class newsletter. Finally, in Chinese 450, Miriam Dawson explored shame in the context of COVID in her paper “The Use of Shaming Language on The Topic Of COVID-19 in the Sino-American Relationship.”

These works demonstrate that students aren’t learning the language for its own sake, but rather to understand cultures, solve problems, and build careers. To learn more about Modern Languages, please visit us at https://www.wku.edu/modernlanguages/index.php.