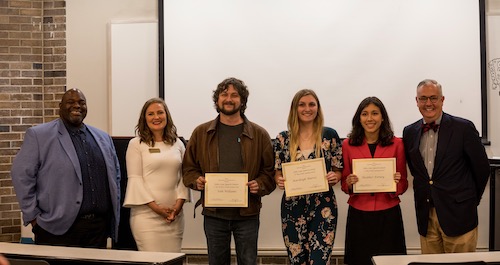 The 13th annual John Lyne Speech Contest, hosted by WKU’s Department of Communication, was back in-person this semester after two years of online competition due to the COVID-19 pandemic. The contest featured students nominated by their faculty from the Fundamentals of Public Speaking course from the Fall and Spring semesters to present their persuasive speeches from their COMM 145 class in a public forum.

Nineteen students came bright and early to the Ivan Wilson Fine Arts Center on April 30 to compete for the top prize of $200. All students competed in the first two rounds of speeches that were judged by coaches from the WKU Forensics team (Ben Robin, Sean Diaz, Chad Meadows, Anthony Survance) and then, following lunch, three finalists presented before a panel of celebrity judges that included President Timothy C. Caboni, PCAL Dean Terrance Brown, and City Commissioner Dana Beasley Brown. President Caboni and Commissioner Brown are graduates of the WKU Department of Communication.

For the recorded speech contest, first place went to Janessa Unseld, a student of Clint Haynes, whose recorded video on the costs of homelessness was presented at the end of the contest. Second place was awarded to Kayla Srinivasan, a student of Donna Schiess, and third place was taken by Ragan Harrington, a student of Julie Sisler.

The event was sponsored by Professor John Lyne and PCAL. Lyne, Professor Emeritus at the University of Pittsburgh, is a WKU graduate who has supported this contest for many years as a way to promote the development of students’ informed citizenship skills and the idea that communication needs to be about active engagement.