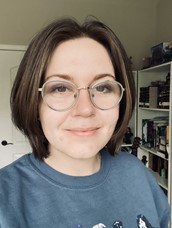 Although she spent her childhood moving around the country in a military family, English major Heather Neidlinger has considered Bowling Green and WKU her home since the 90s.

“I love Western. It’s like a second home to me,” Neidlinger said. “I'd sit in on lectures with my dad when he was taking classes, so it's always been a part of my life.”

Neidlinger graduated from Warren Central High School in 2008, and later earned her bachelor’s in psychology from WKU in 2016. In recent years, Neidlinger decided to pursue her lifelong passion of English, and returned to the Hill to earn a Literature degree with a minor in creative writing. She is set to graduate in 2023.

“I have always been an avid reader and writer. I've written poetry my entire life,” Neidlinger said. “The pandemic hit, and it gave everyone plenty of time for self-reflection. I was like, ‘I'm not really doing anything that I actually wanted to do.’ So, I went back for what I wanted to do instead.”

“Everyone's really inclusive,” Neidlinger said. “I love the English department. They're a great group of people.”

Neidlinger has submitted multiple creative writing pieces into publications and competitions across campus, and is a finalist in the Goldenrod Poetry Festival contest.

“Just do it,” Neidlinger tells anyone who is considering returning to college as a non-traditional student. “If it’s kind of like you’re teetering on the edge of whether you should actually go for it or not, just do the thing, even though it may seem scary.”