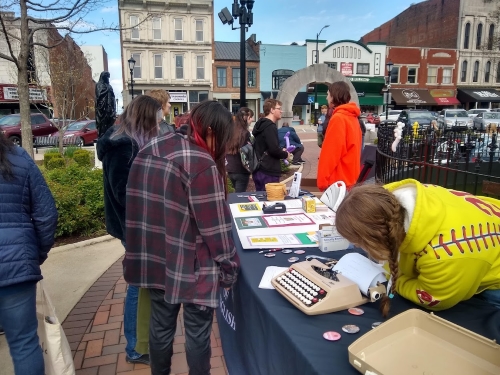 The Potter College of Arts and Letters (PCAL) extended its spirit beyond WKU’s campus to Fountain Square Park in downtown Bowling Green for the first annual Spring Forward Festival on Saturday, April 9. The free event featured live performances by the students of PCAL, an egg hunt for children, and free t-shirts for the first 50 guests. The English Department was one of the many individual departments that set up a table to interact with the community.

Dr. Ted Hovet and Dr. Alison Langdon hosted the table along with a few members of the English Student Advisory Team (ESAT), who volunteer to represent the department at events. The English table engaged people of all ages with a vintage typewriter, where festivalgoers could type flash poems, or even nonsense, to get a feel for the device. There was also a game known as “Punderdome,” where visitors were asked to create a pun by drawing cards with two random words—bad jokes were welcome and even encouraged. Entries were saved for a drawing in which the winner will receive English Department swag. PCAL Dean Terrance Brown was among the many that created an original pun.

English professor Dr. Angela Jones hosted part of the table, offering on-the-spot yoga lessons at her nearby yoga studio, 4yoga. ESAT member Zeita Beaver also made balloon animals, which were special mementos from the event for many.

Though it wasn’t the warmest spring day, the event attracted a substantial crowd. The Spring Forward Festival went beyond the scope of current students, and the English Department was able to connect to the Bowling Green community at large.