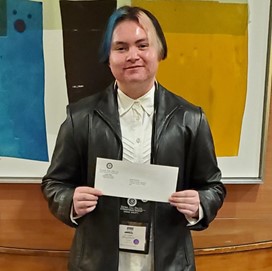 Adairville junior Joseph Shoulders was awarded the Stemmler/Dennis LGBT Award at the 2022 Sigma Tau Delta Convention in Atlanta, Georgia. Sigma Tau Delta, or the International English Honors Society, holds a convention each spring that allows participants to share essays, creative pieces, and other work within the English discipline with each other. In addition to Shoulders, five other WKU English majors who presented their work at the convention were Valerie Feldker, Eli Edens, Lizzy Roth, Kayla Spears, and Faith Yonts.

“This convention is a great way for WKU students to meet other English majors from around the country, and to gain valuable professional experience,” said Dr. Ted Hovet, the Sigma Tau Delta chapter sponsor.

Shoulders won the Stemmler/Dennis Award for his essay, Proto-Homosexuality in Epic of Gilgamesh, which will be published in this semester’s edition of The Ashen Egg. The essay explores homosexual themes in the novel Epic of Gilgamesh and the hesitance literary critics have towards acknowledging them.

“I discussed how people respond to Gilgamesh and Enkidu’s relationship as a romantic relationship,” Shoulders said. “The fact that it exists at all in the oldest piece of literature in human history says a lot about the place that queerness has in human sociology.

Shoulders attended Gatton Academy at WKU before deciding to stay and earn his undergraduate degree in Literature. He says he was inspired to become an English major by Professor Walker Rutledge after taking English classes both on campus and at Harlaxton College. Shoulders also cites Dr. Alison Langdon as a significant influence on his love for the English major.

Aside from being a member of Sigma Tau Delta, Shoulders is a part of the English Student Advisory Team, and frequently volunteers at events within the English department.

“I think that people don't realize how many pathways are available to you as an English major. You can go into social work, become a lawyer, you can go into a STEM field, even after an English major,” Shoulders said. He stressed the importance of connecting skills and ideas learned in English classes to issues in other fields and broader society. “What's important is that you make those connections. You'll start to see that those connections will really take you as far as you want to go.”