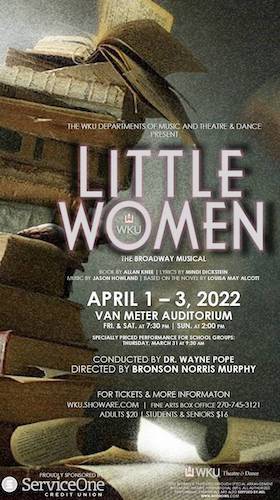 The WKU Departments of Music and Theatre & Dance will present Little Women: The Broadway Musical April 1-3 at Van Meter Hall.

Little Women tells the story of Jo, Meg, Beth and Amy March, sisters growing up in Civil War America. With soaring vocals and beautiful orchestrations, this musical guarantees the complete theatrical experience – laughter, tears, and a joyous lifting of the human spirit.

“The rehearsal process for Little Women has been, in a word, wonderful,” Murphy said. “I knew that I wanted to bring an industry approach to this process from the beginning, and I had hoped it wouldn't be too quick for the student cast and design team. It certainly hasn't been. I've been holding the entire production to professional standards and practices as well as a very strict timeline. Everyone involved has risen to the occasion and put their best work forward. Though I have a guiding hand, the production our audiences will see is truly theirs - a collaborative effort filled with love and a sprinkling of joy - which is what all good theatre should be!”

Murphy, a native of Bowling Green, has appeared on stage, film and television. Best known for his performances in the works of Andrew Lloyd Webber, Murphy premiered the role of The Phantom in the first North American production of Love Never Dies: The Phantom Returns. He made his principal debut on Broadway as Raoul in the long-running production of The Phantom of the Opera and starred in the world premiere of Unmasked: The Music of Andrew Lloyd Webber, the 30th Anniversary touring company of CATS and the New York City Center Gala Production of EVITA. As a concert artist, his symphonic work includes evenings with The Nashville Symphony, The Florida Orchestra, Rochester Philharmonic, Orchestra Kentucky, Ft. Worth Symphony, Chattanooga Symphony, and more. Murphy also serves as the Associate Artistic Director of The Stephen Foster Story, Kentucky’s "Official Outdoor Musical" in Bardstown.

When asked what it was like to be back on campus directing, he replied, “I have to admit, I've been suffering from a light case of imposter syndrome much of the time! I'm now collaborating with and offering direction to some of the same faculty with whom I studied years ago. To be ‘in charge’ of a production on campus is an honor and a privilege and I take the job very seriously. I know this could be a remarkable experience for the students - as the productions I acted in at WKU were for me - and so I want to create a beautiful show while guiding a process that will leave the students with pride and fond memories for years to come.”

Murphy said there are too many “beautiful, heartfelt and touching moments in the show” to name a favorite, but “perhaps the most aurally thrilling moment is at the beginning of Act Two where the entire cast is on stage singing the anthem of the show: ‘Sometimes when you dream, your dreams come true in extraordinary ways. Suddenly, a day can be so amazing. And sometimes when you yearn, you burn the air and then you are not the same. The world becomes yours to claim when someone else feels the flame you always knew was there. I'll astonish the world.’”

When asked to name the most rewarding part of this process, Murphy replied: “By trade, I am an actor. Getting to be a part of this production from the ground up - from the first concept meetings, to working with choreographer and childhood friend Hannah Slattery, and molding the songs with one of my favorite college professors, Dr. Wayne Pope, has been so rewarding. As much knowledge as I am trying to bring to these students, this process has taught me twice that. It’s so important to truly value the artists who come to work each day with ideas that are helping shape this joyous production!”

Performances of Little Women: The Broadway Musical will take place in Van Meter Hall on WKU’s Bowling Green campus. Show times are 7:30 p.m. April 1, 7:30 p.m. April 2 and 2 p.m. April 3. Tickets are $20 for adults and $16 for students/seniors (62+) and can be purchased in advance at wku.showare.com or at the door.