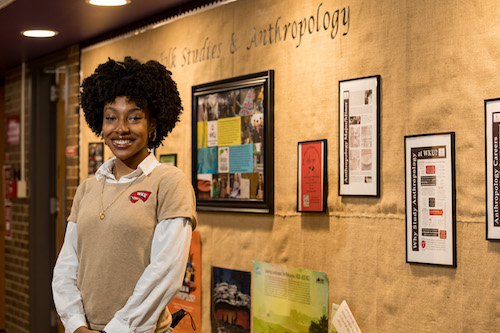 “Growing up in a multicultural hub, especially in Memphis, and getting to know a completely different culture than mine and loving it and still being able to come back to my own culture and love mine definitely grew my experiences in wanting to do my degree.”

Gillespie has held multiple leadership positions during her time at WKU. She has been a member of the Anthropology Club as the Historian, head of Media Outreach, and Secretary. She is also the current Vice President and Membership Chair of Sigma Gamma Rho Sorority Inc. and formerly held positions as the Secretary and Parliamentarian in the organization. This month, she is excited to promote her sorority in the Phi Beta Sigma Black Experience Event which will showcase how Sigma Gamma Rho has impacted Black History. Gillespie stated that the best experience during her time at WKU has come from making the friends she has through being a part of campus life.

"The organizations that I’ve been in so far have really pushed me to be social and made me have the connections that I probably would never have if I was just spending my freshmen year in my dorm. The people that I have now in my life are really shaping who I am.”

Gillespie has also been working with the Kentucky Archaeological Survey (KAS) for the past two years on creating an educational series about cultural and natural resource preservation for Living Archaeology Weekend.

One experience that stands out in her time at WKU is a research trip with Folk Studies and Anthropology Department Head, Dr. Darlene Applegate.

"I went to Red River Gorge with Dr. Applegate and we were there doing a research project we're working on right now. We stopped at this taco place and were talking about how in this small town, people were kind of giving me weird looks and not being the friendliest,” Gillespie stated. “I started talking to Dr. Applegate about it—I was like ‘it's so weird, I have these experiences at school too. Just because we’re in a small town, there's no difference being in Bowling Green.’ The conversation went on to talk about how the faculty at WKU would really like to help with that and how she would give me the opportunity to speak on the issues I find, not only in Bowling Green, but on campus. That conversation that I had with her jump-started a couple of projects we're working on now about community outreach in the Black community and recruitment and retention. That experience knowing that faculty is really out here trying to help and trying to listen to our voices is really one of the best experiences.”

Gillespie is currently working on a collaborative project between the Folk Studies and Anthropology Department and Potter College Diversity, Equity, and Inclusion (DEI) committee researching underrepresented minority students at WKU.

“We’re doing research on past and present WKU students that are African American or people of color and how they feel that WKU is helping them with their graduation process and how well WKU is doing recruiting as well as keeping students in the program. Right now, we’re in the mix of trying to get that data and research together and we’re meeting with Alumni trying to see their thoughts on how WKU has done.”

She is also pushing for more representation of Black students on campus saying, “[WKU] is a primarily white institution but its advertised as that as well, even though there are people of color on campus. I think media coordinators as well as other colleges can really start to push the representation of Black students on campus because we’re here. We’re getting our degrees, we’re making good grades, so I would like to see it more.”

To all other students coming to WKU with a similar racial background, Gillespie says to stay true to yourself.

“My advice would be to remember who you are and where you came from. When we get to college, we kind of get confused about where we’re about to go in life, the friends we need to meet, and how we need to impress the people that we need to impress. In all reality, being a person of color and being a Black person is never going to change and that should be something that you should be very proud of.”

Gillespie graduates this spring and plans to pursue a career at a cultural resource management firm or work with user experience. Her dream goal is to one day make an ethnographic film or documentary.