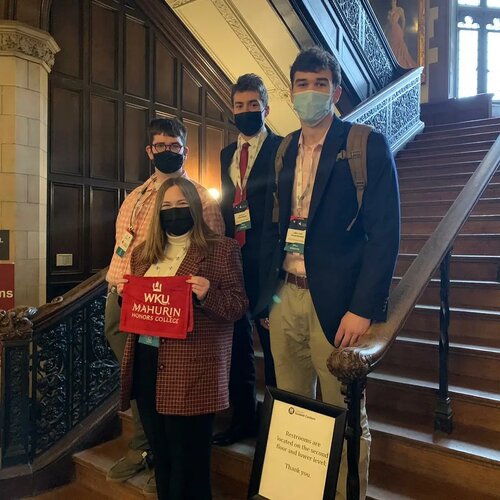 Debating in one’s own language is a challenge but debating in a modern language elevates debate competitions to a new level. Last weekend, WKU Arabic students Reece Gillespie, Garrett Strickler, Kerby Gilstrap, and Cody Smith, along with Modern Languages Arabic instructor Lhousseine Guerwane, participated in the second annual U.S. Arabic Debate Championship (USADC) at the University of Chicago, hosted by QatarDebate. According to their website, the QatarDebate Center encourages “open discussion, free thought on topics, and constructive debate” throughout the Arab world and hosts several events in America for students to utilize their Arabic language proficiency in debates on modern topics.

During the event last week, students debated topics in Arabic ranging from space tourism and the current system of two political parties in the United States to violence in modern dramas and television series. Students received the motion just before the debate and had twenty minutes to prepare together as a group before presenting their ideas and refutations to the other teams’ arguments. The essential key to debating is to present ideas in a logical manner and structure and to build strong arguments which are difficult to refute. Such argumentation, structure, and discussion lead to empowering dialogue through the art of debate.

“I knew that participating in Arabic Debate would develop my speaking skills, but I was surprised at how much my listening and translating skills developed, too. Before Arabic Debate, I knew I wanted to use Arabic to solve collective problems through difficult conversations, but now more than ever I am sure of my passion to use Arabic in this way in the future. USADC was an empowering experience and a culmination of my language studies at WKU over the last three years,” said Bowling Green senior Kerby Gilstrap, an International Affairs and Arabic major.

Last week, WKU was declared the winner in two debates against the University of North Georgia (team 2) and George Mason University. Winning debates, however, is not the only goal of WKU Arabic’s participation in the USADC. Another goal of WKU’s participation in the debate is to provide an unforgettable experience that leads to learning and building Arabic language proficiency through open dialogue with Arabic learners and native speakers across the nation.