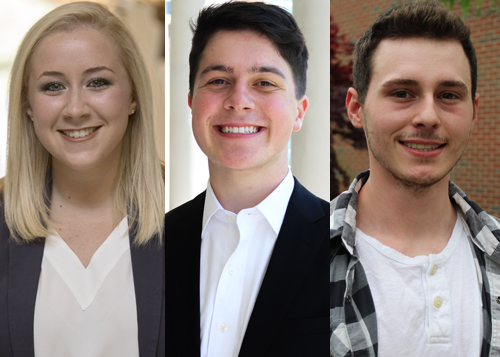 Kate Hart of Princeton, Nathan Read of Belleville, Illinois and Tristan Shaw of Glasgow are students in the Chinese Flagship Program and will complete their Capstone Year in China with Boren Scholarship funding. If additional funding becomes available, Michael Dimeo of Bowling Green, currently an alternate, plans to use the scholarship to fund six months of language study in Kunming and Beijing, China.

NSEP is a major federal initiative designed to build a broader and more qualified pool of U.S. citizens with foreign language and international skills. NSEP’s Boren Awards program provides scholarships to U.S. undergraduate and fellowships to U.S. graduate students to acquire language skills and experience in countries critical to the future security and stability of our nation. In exchange for funding, Boren Award recipients agree to work in the federal government for a period of at least one year.

“The National Security Education Program,” according to Dr. Michael A. Nugent, NSEP Director, “is helping change the U.S. higher education system and the way Americans approach the study of foreign languages and cultures.”

Hart is a fourth-year international affairs, Spanish and Asian religions and cultures major and the daughter of Sally and Fred Hart. She has been actively involved in student government and university-wide budget and academic quality committees, as well as the Hilltopper Organization of Latin American Students and Phi Mu Fraternity. She has published research with Dr. Timothy Rich in the Department of Political Science on Taiwanese President Tsai’s approval rating and her administration’s domestic and international policy. Hart is a past recipient of a Freeman Award for Study in Asia and a U.S. Department of State Critical Language Scholarship. She plans to pursue a career in intelligence analysis in the federal government.

Read is a fourth-year economics, international affairs and Asian religions and cultures major and the son of Denise and David Read. At WKU, he has served as a Student Alumni Ambassador, an officer in the Chinese Culture Club and is a member of the Omicron Delta Epsilon International Economics Society. Read has conducted research with Dr. Timothy Rich in the Department of Political Science on China’s economic policy during the 1997 Asian Financial Crisis and with Dr. Yang Liu of the Chinese Flagship Program on Chinese economic policy and the environment. Read was awarded a U.S. Department of State Critical Language Scholarship in 2017 but declined it to participate in another intensive language program. He plans to pursue a career as an economics officer in the U.S. foreign service or as an analyst in the U.S. Department of Commerce.

Shaw is a fourth-year international affairs and Asian religions and cultures major and the son of Beverly Reece and Kenneth Shaw. At WKU, he has been an active member and officer of the Tennis and Badminton Clubs. He received a U.S. Department of State Critical Language Scholarship in 2016 that funded intensive language study in Xi’an, China. He plans to pursue a career in the Department of State or Defense working to implement multilateral, multicultural solutions to current and future policy conflicts.

Dimeo is a fourth-year advertising and Chinese major and the son of Carolyn and David Dimeo. In addition to participating in the WKU Chinese Club, he has served as marketing ambassador with the College Heights Herald and the social media manager of WKU’s chapter of Project Pengyou, an initiative of the U.S. Department of State that builds cultural bridges between American and Chinese people. He was recently awarded a Department of State Critical Language Scholarship for summer 2018. Dimeo plans to pursue a career in public diplomacy, working to strengthen the American “brand” abroad and foster greater cooperation between Americans and Chinese.

This year, the Institute of International Education, which administers the awards on behalf of NSEP, received 794 applications from undergraduate students for the Boren Scholarship and 221 were awarded; 300 graduate students applied for the Boren Fellowship and 120 were awarded.  Boren Scholars and Fellows will live in 38 countries throughout Africa, Asia, Central and Eastern Europe, Eurasia, Latin America, and the Middle East.  They will study 33 different languages. The most popular languages include Arabic, Mandarin, Russian, Portuguese, Japanese, Swahili, and Korean.

“To continue to play a leadership role in the world, it is vital that America's future leaders have a deep understanding of the rest of the world,” says University of Oklahoma President David Boren, who as a U.S. Senator was the principal author of the legislation that created the National Security Education Program and the scholarships and fellowships that bear his name. “As we seek to lead through partnerships, understanding of other cultures and languages is absolutely essential.”