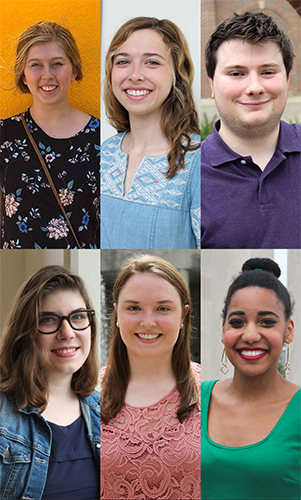 Six WKU students have been offered Fulbright U.S. Student Grants for the 2018-19 academic year from the U.S. Department of State and the J. William Fulbright Foreign Scholarship Board: Sarah Angelle of Monticello; Sarah Linder of Louisville; Logan Mitchell of Hebron; Lily Nellans of Windsor Heights, Iowa; Maggie Sullivan of Louisville; and Elizabeth Upshur of Antioch, Tennessee. Recipients of Fulbright awards are selected on the basis of academic and professional achievement as well as record of service and leadership potential in their respective fields.

Sarah Angelle, a graduating senior in middle grades mathematics, science and math education, mathematics and Chinese and a 2014 graduate of the Gatton Academy of Mathematics and Science, is the daughter of Jill and Michael Angelle. Her Fulbright grant will fund a year of teaching English in Taiwan. At WKU, Angelle has researched and developed math and language pedagogy as a member of the SKyTeach program, founding the SKyTeach Student Organization and tutoring early childhood to adult learners in a range of subjects. This spring, she defended her honors thesis, a systematic review of empirical research on problem- and project-based instruction in K-12 education in the 21st century and recommendations for use in STEM education, under the direction of Dr. Lisa Duffin of the Department of Psychology and Dr. Martha Day of the School of Teacher Education.

Angelle’s interest in Chinese language and cultures took root in her first year at the Gatton Academy, when she became an inaugural member of the Gatton Academy’s STEM + Chinese track. Between her first and second years, she traveled to China on a Bridge to China Summer Program for high school students with the WKU Confucius Institute. In 2014, she was awarded a U.S. Department of State National Security Language Initiative for Youth (NSLI-Y) scholarship that fully funded a summer of language study in China. Most recently, she traveled to Taiwan to teach English in winter 2016 and looks forward to a year spent getting to know the students and teachers who make up Taiwan’s educational system.

Sarah Linder, a graduating senior in art history and chemistry, is the daughter of Elizabeth and Mark Linder. Her Fulbright grant will fund the first year of a two-year master’s degree in conservation of fine art at Northumbria University in the United Kingdom. Linder recently defended her honors thesis on the conservation of Italian fresco under the direction of Dr. Guy Jordan and assistance of Dr. Michael Nichols, both of the Department of Art. Linder undertook field research for her thesis in Vittorio Veneto, where she not only learned to create and conserve frescoes using local materials, but also became aware of significant variation in the quality and permanency of a particular pigment (vermilion). She plans to study this variation in the program, which combines historical and chemical analysis of artwork.

Beyond research, Linder has pursued community service through Alpha Delta Pi, the Circle of Sisterhood and International Justice Mission. She has built leadership and mentorship skills as an active member of the Mahurin Honors College community, serving as an Honors Freshman Orientation Retreat counselor and an HonorsTopper ambassador. She looks forward to extending her ambassadorial and professional experience as a collections management volunteer in the Kentucky Museum to her host community of Newcastle by volunteering at local museums and art galleries.

Logan Mitchell, a graduating senior in meteorology, Chinese, and geographic information systems and a 2014 graduate of the Gatton Academy of Mathematics and Science, is the son of Traci Markgraf and Scott Mitchell. He will use Fulbright funding to investigate how land usage in China’s Jiangsu province contributes to the severity of smog.  Earlier this spring, he defended his honors thesis analyzing urban heat islands in Kentucky, which he completed under the mentorship of Dr. Rezaul Mahmood and the assistance of Drs. Greg Goodrich and Stuart Foster in the Department of Geography and Geology.

Mitchell has spent years building a foundation to connect Chinese language and culture to climatology. With Angelle, he was also an inaugural member of the Gatton Academy’s STEM + Chinese track, studying for a summer at North China Electric Power University in 2015. As a long-time member and recent president of the WKU Chinese Club, he organized events including a language-partner program to foster cultural exchange between American and Chinese students at WKU. He has worked for four years at the Kentucky Mesonet and WKU’s Center for Human GeoEnvironmental Studies (CHNGES), conducting hydrologic budgeting research at Lost River Cave with Dr. Jason Polk and at Crumps Cave with Dr. Chris Groves. His Fulbright grant provides a long-awaited opportunity to unite his research and cultural interests in the service of climate science.

Lily Nellans, a graduating senior majoring in philosophy and international conflict studies (self-designed), is the daughter of Jennifer and Bill Nellans. She has been offered a Fulbright to teach English in Bosnia and Herzegovina but plans to accept another nationally competitive award to fund postgraduate study at the London School of Economics and Political Science, where she is interested in conducting research on the viability of using gender systems to predict genocidal violence. She recently defended her honors thesis on the dynamics of higher education in countries that have experienced ethnic conflict, which she completed under the mentorship of Dr. Marko Dumančić in the department of history. Nellans’ academic work has been reinforced by research on these issues in Kosovo, an internship at the International Commission on Missing Persons in Sarajevo, study at the University of Haifa in Israel funded by a Foundation for Global Scholars scholarship and teaching with an educational nongovernmental organization in Doboj and Tuzla, Bosnia.

Nellans is a highly decorated member of WKU’s Forensics Team, achieving a national championship in impromptu speaking at the American Forensics Association tournament in 2017. The same year, she was named a Truman Scholarship finalist. She plans to pursue a career applying her research with global human rights organizations.

Maggie Sullivan, a graduating senior majoring in international affairs, is the daughter of Laura and Joe Sullivan. She has been awarded a Fulbright to teach English in Bulgaria and will be placed in the northeastern city of Silistra, just across the Danube River from Romania. Sullivan has interned for the U.S. Department of State since 2016, first as a Virtual Student Federal Service intern and most recently as a member of the U.S. Foreign Service Internship Program. She completed a placement last summer in the Office of Refugee Admissions in the Bureau of Population, Migration and Refugees and will spend this summer at the U.S. embassy in Sarajevo in Bosnia and Herzegovina.

On and off campus, Sullivan has devoted her energy to understanding and advocating for refugee-related issues. As a Virtual Student Federal Service intern, she founded and led the WKU chapter of No Lost Generation, an organization that raises awareness of migrant youths around the world. As an intern with Kentucky Refugee Ministries, she helped clients access higher education opportunities. With Dr. Timothy Rich in the Department of Political Science, Sullivan conducted research and published an article in the Washington Post analyzing the willingness of survey respondents to admit refugee Muslim and non-Muslim women, children, and young men. Upon her return from Bulgaria, Sullivan intends to work in community development with refugees before pursuing graduate education in international affairs.

Elizabeth Upshur, an MFA student in creative writing, is the daughter of Claudette and Wayne Upshur. She has been awarded a Fulbright to Benin for a project that combines creative nonfiction, poetry, and photography to tell the stories of her maternal genealogy from west Africa to the American continent. Upshur is the first WKU student to receive a Fulbright award for study in sub-Saharan Africa. She has previously conducted research with Dr. Chris Lewis on black women writers and is currently completing her multi-disciplinary MFA thesis under the direction of Drs. Dale Rigby, Cheryl Hopson, and Rebbecca Brown in the Department of English.

Upshur has been awarded a Katharine Bakeless Nelson scholarship to the 2017 Bread Loaf Translators' Conference, completed a two-year internship with the international English honor society Sigma Tau Delta and presented and chaired a panel on diversity in academic spaces at the 2018 annual conference of the Association of Writers and Writing Programs. Most recently, Elizabeth received the 2018 Eleanor Clark Award for best graduate paper from the Robert Penn Warren Circle. After her year in Benin, Upshur plans to pursue a Ph.D. in English literature or comparative literature.

All applicants worked with Dr. Melinda Grimsley-Smith, coordinator of international scholarships in the Office of Scholar Development, who serves as Fulbright U.S. Student Program Advisor for WKU and encourages students and recent alumni interested in applying to contact osd@wku.edu as soon as possible. Advising continues through the summer in preparation for the September 4 campus deadline.

Since its inception in 1946, the Fulbright Program has provided more than 380,000 participants — chosen for their academic merit and leadership potential — with the opportunity to exchange ideas and contribute to finding solutions to shared international concerns. Over 1,900 U.S. students, artists and early career professionals in more than 100 different fields of study are offered Fulbright Program grants to study, teach English and conduct research annually in over 140 countries throughout the world.

The primary source of funding for the Fulbright Program is an annual appropriation by the United States Congress to the U.S. Department of State’s Bureau of Educational and Cultural Affairs. Participating governments and host institutions, corporations and foundations in foreign countries and in the United States also provide direct and indirect support.

In the United States, the Institute of International Education supports the implementation of the Fulbright U.S. Student Program on behalf of the U.S. Department of State, including conducting an annual competition for the scholarships.