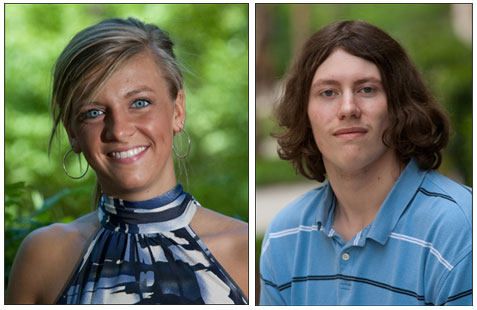 For the second consecutive year, Western Kentucky University students are being honored with SMART Scholarships from the United States Department of Defense (DoD).  Two WKU students are receiving scholarships which represent a combined value of more than $500,000 of funding over the course of the next four years.

Jacob Haven of Paris, a second-year student in the Gatton Academy of Mathematics and Science in Kentucky at WKU, and Brittany Logan, a sophomore from Englewood, Ohio, have accepted scholarships from the Science, Mathematics And Research for Transformation (SMART) Scholarship for Service Program.

The SMART Scholarship funds tuition and provides a living stipend, books, health insurance reimbursement, and paid summer internships for recipients of the prestigious award.  Students are also promised employment placement with a DoD laboratory upon the completion of their studies and internships. This year, 298 scholarships were awarded nationwide out of more than 3,400 applications.

Logan and Haven are the second and third students at WKU to be awarded SMART Scholarships. Rachel Bowman of Murray was the first WKU student to receive the scholarship in 2009 while attending the Gatton Academy.  She is currently pursuing a bachelor’s degree at Massachusetts Institute of Technology.

Dr. Audra Jennings with the Office of Scholar Development (OSD) noted the process begins when students engage with faculty in research projects. The scholarship provides the students with a unique opportunity by “freeing them to do research, publish articles and focus on school,” she said.

The OSD and the Gatton Academy hosted a representative of the SMART Scholarship to campus to speak with applicants to encourage students to pursue the opportunity. Moreover, OSD and Academy staff helped students to develop and polish their applications, even hosting an intensive essay review workshop.
Haven, the son of Roy and Karen Haven, graduates from the Gatton Academy Saturday. He will use his scholarship to pursue a bachelor’s and master’s degree program in computer science at Stanford University in California. He will be spending his summers at the Space and Missile Systems Center at Los Angeles Air Force Base for his paid internships.

Haven hopes to continue the mathematics research he has been conducting at WKU when he moves to Stanford.  Haven’s research started his first semester at the Gatton Academy as a group effort with Dr. Attila Por in WKU’s Department of Mathematics and Computer Science and developed into a one-on-one mentorship where Dr. Por assisted him in a study on algorithms to find the unit element of the Bak–Tang–Wiesenfeld Sandpile model.

“Dr. Por has taught me about a lot of new concepts that I never would have had exposure to otherwise if it weren’t for my research project,” Haven said.
Haven’s research project stemmed from an after-class conversation with Dr. Por and a passion for discrete mathematics that they both share.  “Jacob approaches questions and problems with an open mind and creativity,” Dr. Por said. “As a researcher, he shows determination and picks up new concepts fast.”

Logan, the daughter of Kent and Deborah Logan, will use her scholarship to complete her electrical engineering and physics degree at WKU—she will be the first WKU student to complete these two majors simultaneously.  Logan will spend her summers interning at Holloman Air Force Base in New Mexico where her focus will be on global positioning systems.

Logan has been working with WKU’s Applied Physics Institute with Dr. Doug Harper and is a member of WKU’s team in the Lunabotics Mining Competition sponsored by NASA. The Lunabotics team, directed by Dr. Stacy Wilson, Dr. Kevin Schmaltz, and Dr. Julie Ellis, is developing a robot that can move moon regolith and will compete in Cocoa Beach, Fla.

Dr. Walter Collett of the Department of Engineering said: "Brittany is an academically talented and extremely conscientious student. She consistently demonstrates a strong commitment to excellence, and has the requisite curiosity and intellectual ability for a very successful career in science and engineering. She is an asset to the engineering program at WKU."

Logan wants to conduct research in alternative energy fields, such as hybrid vehicles, nuclear energy or updating the current electrical power grid. She said she originally planned to apply for another national scholarship that offered only a two-year scholarship, but was guided to the SMART Scholarship program which will allow her to complete her degree and work on cutting-edge research in some of the most sophisticated, state-of-the-art facilities in the world.   She stated that the scholarship and internships were a “great opportunity, and having a job when I finish my degree is a great relief.”
Both students say they plan to continue their education beyond the program and earn doctorates.

“Amy Eckhardt (OSD director) was very helpful through the entire process,” she said.

About the Carol Martin Gatton Academy:
The Gatton Academy offers a residential program for bright, highly motivated Kentucky high school students who have demonstrated interest in pursuing careers in science, technology, engineering and mathematics. Sixty students each year are admitted to the program through a competitive process. Instead of spending their junior and senior years in traditional high schools, students enroll in the Gatton Academy and live in a uniquely dedicated residence hall. The goals of the Gatton Academy are to enable Kentucky’s exceptional young scientists and mathematicians to learn in an environment which offers advanced educational opportunities and to prepare them for leadership roles in Kentucky.  At the end of two years, Gatton Academy students will have earned at least 60 college credit hours in addition to completing high school.

About the SMART Scholarship:
The SMART Scholarship was established by the Department of Defense (DoD) in 2006 to support undergraduate and graduate students pursuing degrees in Science, Technology, Engineering and Mathematics (STEM) disciplines. The program aims to increase the number of civilian scientists and engineers working at DoD laboratories. The DoD offers this scholarship for service to individuals who demonstrate outstanding ability and special aptitude for a career in scientific and engineering research and product development, express interest in career opportunities at DoD laboratories and are pursuing a degree in, or closely related to one of the STEM disciplines.