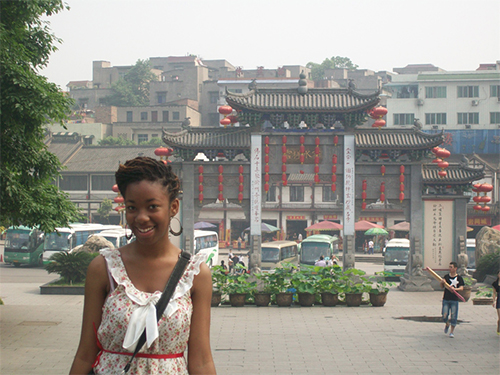 Darra Jackson, a member of the inaugural class of the WKU Chinese Flagship Program, has been awarded a multi-year Chinese Government Scholarship, funded by the China Scholarship Council and China’s Ministry of Education.

Jackson, of Atlanta, is a sophomore in the Honors College majoring in International Affairs. She was attracted to WKU because its motto A Leading American University with International Reach demonstrated the university’s emphasis on study abroad. Jackson has been studying Chinese for a year at WKU, and the Chinese Government Scholarship will enable her to travel to China for the fourth time.

For Jackson, the Chinese Flagship Program at WKU not only helps students develop language skills and cultural fluency, but also works to prepare students to succeed in a globalizing world.

“The Chinese Flagship has given its participants so many opportunities outside of just learning Chinese,” Jackson said.  “From art majors to computer science majors, we have all had opportunities to explore our future careers from an international perspective. As an International Affairs major, for example, I have observed how relationships are especially important in the Chinese culture.”

Dr. Liping Chen, Academic Director of the Chinese Flagship Language Institute, is delighted that Jackson received the award. “I am very glad for her. She has made impressive progress since she joined our Flagship program,” she said.

The Chinese Government scholarship gives Jackson the opportunity to immerse herself in the language for four to five years at any university in China. Jackson has chosen to study at Beijing Language and Culture University; her studies will begin this fall.

In addition to a full tuition remission, the scholarship also covers housing, books, medical insurance and a monthly stipend. This year, more than 200 students applied through the Chinese Embassy. According to Xiao Liu, who works in the Education Office of the Chinese Embassy in Washington, D.C., the Consulates-General review the applications and make their recommendations back to the Chinese Scholarship Council.

Haiwang Yuan, WKU Professor and Special Assistant to the Dean for Web & Emerging Technologies in the Department of Library Public Services, assisted Jackson in her application and was impressed by Jackson’s long-term goals. “Darra would like to be proficient in the Chinese language,” Yuan said,  “so that she could work in the interests of America while helping promote the friendship between the peoples of the two countries.”

Yuan added that for Jackson to receive such a competitive scholarship is a reflection on the high quality of students at WKU and in the Chinese Flagship program.

Jackson hopes to make the most of her year in China. “I feel honored to receive this prestigious scholarship,” Jackson said, “and will certainly use this experience to not only improve my Chinese, but to also learn more about Chinese culture.”

About the Chinese Flagship Program: WKU’s federally funded Chinese Flagship program is designed to bring talented students who start with no knowledge of Chinese up to Superior levels of proficiency by the time they graduate from college. WKU is one of nine universities funded for Chinese by The Language Flagship through the National Security Education Program.  If you are interested in Chinese language or cultural programming, contact Melinda Farmer at Melinda.farmer@wku.edu or call the Office of Scholar Development at (270) 745-5043 to schedule an appointment.