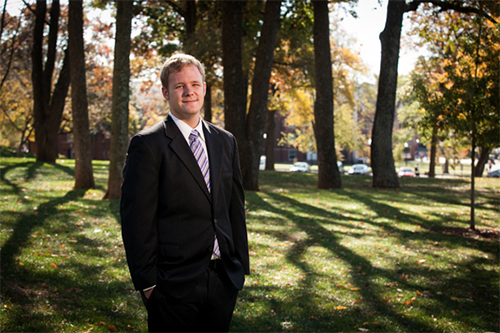 Cory Dodds, a WKU senior from Smithland, Ky., has been selected as a finalist for the 2012 George Mitchell Scholarship Program.

Dodds is the first student from WKU to earn this honor. He will travel to Washington, D.C., to compete in the final round of interviews with 19 other finalists from across the country. From this group, 12 applicants will be selected for the award.

The Mitchell Scholarship, like the Marshall and Rhodes scholarships in the United Kingdom, is extremely competitive. About 4 percent of Mitchell applicants will receive the scholarship. Dodds is the only Kentuckian and the only student from a Kentucky institution among the finalists.

The son of Debbie and Randall Dodds, Cory Dodds has been active in FFA since his freshman year of high school. Through this affiliation, he developed his passion for rural development. Dodds served as the Kentucky FFA State Sentinel and a delegate to the National FFA Convention. After leaving state office, he continued to support the National FFA Organization as an alumnus and worked at the Kentucky FFA Leadership Training Center for the past three summers.

After leaving his statewide position in FFA, Dodds became involved with the Student Government Association at WKU as the director of information technology, a position he held for two years. Last semester, the university community elected him as SGA president and student representative on the WKU Board of Regents for 2012-2013.

“Cory’s ambassadorial potential is enormous,” Dr. Coffey said. “Culturally sensitive and able to encourage consensus, he will easily span boundaries beyond the USA. He has a clear vision for his future in rural and food policy and will achieve it.”

Dodds was previously recognized on the nationally competitive scholarship stage when he was selected as a finalist for the Harry S. Truman Scholarship in spring 2012.

“I am honored to be progressing to the next step in the competition,” Dodds said. “WKU has provided me with numerous opportunities and mentors who have counseled and supported me through the past four years.”

While completing his application, Dodds sought the guidance of Dr. Audra Jennings, director of the Office of Scholar Development, and Dr. Melinda Grimsley-Smith, coordinator of international scholarships.

“Working with Cory was an honor for OSD,” Dr. Jennings said. “He is the kind of person who recognizes problems around him and takes action to remedy them, and he is the kind of leader who motivates others to engage in the process. This is a celebratory moment for his success and for the university.”