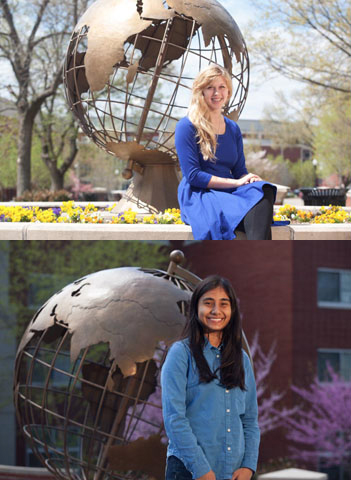 Two students at the Carol Martin Gatton Academy of Mathematics and Science in Kentucky at WKU have been offered nationally competitive scholarships for immersive language study this summer.

The National Security Language Initiative for Youth (NSLI-Y) scholarships are sponsored by the U.S. Department of State, offering complete funding for the six-to-eight week programs, including a four-day orientation in Washington, D.C., travel to-and-from the host countries, housing with host families, meals, and all activities and fees. NSLI-Y scholarships are merit-based and for high-achieving secondary school students to learn critical languages through immersion.

Angelle is the daughter of Michael Angelle and Jill Angelle of Monticello. When Angelle graduates the Gatton Academy in May, she will be continuing her studies at Western Kentucky University and has been accepted to the Chinese Flagship Program at WKU.

“I’m sure I want to do this for the rest of my life,” Angelle said of her language study. “I can talk about things from the culture, food, and even school systems, education, and the economy that there is no way I could have two years ago. But I still have language gaps for everyday items, and I am looking forward to filling in my vocabulary even further.”

Since being at the Gatton Academy, Angelle traveled to China for the first time last summer through the Bridge to China Summer Program for high school-aged students with the WKU Confucius Institute. She has also been involved with Dr. Martin Stone’s research group in the Department of Agriculture.

Angelle plans to major in Agriculture at WKU. She hopes to join the Peace Corps after graduating, and to eventually work in agricultural education bringing clean water to rural Chinese communities.

Sharma is the daughter of Dr. Nilesh and Vibha Sharma of Bowling Green. Though she already speaks Hindi, Sharma applied to the program because she wanted to learn to read and write in the language.

Sharma learned about the scholarship through the Gatton Academy and the Office of Scholar Development. “I saw the email and I thought, ‘Oh my gosh, it’s a summer opportunity in India!’” Sharma said.

Sharma is a participant in the yearlong Genome Discovery and Exploration Program under the mentorship of Dr. Rodney King and Dr. Claire Rinehart of the Department of Biology. Recently, she presented at the WKU Student Research Conference and won her session award. Sharma has also started an independent research project with Dr. Ajay Srivastava in the Department of Biology, where she is investigating how silver nanoparticles are taken up by various tissues in Drosophila (fruit flies).

With ambitions to become a cardiologist, Sharma aspires to eventually travel back to India to promote healthcare in rural areas of the country.

“Ananya and Sarah are wonderful examples of well-balanced students,” said Dr. Tim Gott, director of the Gatton Academy. “Their passion for language development along with their interests in STEM studies opens up greater opportunities for them throughout the world. One of the goals of the Gatton Academy is to equip students to be global citizens; Ananya and Sarah exemplify this goal fully.”