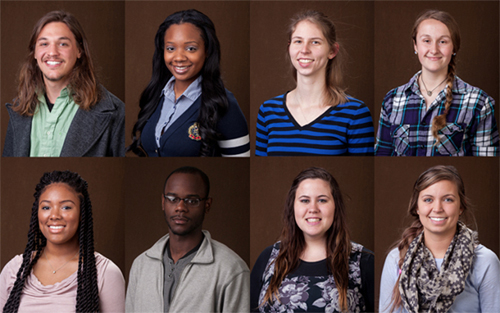 Eight WKU students have been recognized by the U.S. Department of State through the Benjamin A. Gilman International Scholarship program.

Alternates were Margaret Riney of Owensboro and Keeley Stephens of Bowling Green.

Tyler Allen, the son of Theresa Hinsberg-Allen of Bowling Green, received $3,000 for travel to Belgium. The Film and Political Science major, who will graduate in 2014, will be researching Islam and citizenship in Western Europe in the form of a short documentary.

“I am studying abroad in Brussels, Belgium, with short excursions to other countries,” Allen said. “I will be interning and taking a political science course to fulfill my requirements for my political science degree. I have also opted for a home-stay with a family that lives in Brussels in order to get the fullest experience of citizenship in Belgium.”

Kaleiah Brown, the daughter of Freya Brown, received $3,000 to travel to Tanzania. The nursing major, who will graduate in 2016, will study at the University of Dar es Salaam.

“I will be studying women’s health in Tanzania along with elementary Swahili,” she said. “While I am in Tanzania, I will be participating in a lot of activities like culture day, wildlife safaris and helping kids at local orphanages.”

Valerie Farsetti, the daughter of Ralph Farsetti, received $5,000 to travel to Chile. The Social Work and Spanish major, who will graduate in 2014, will spend eight weeks interning at the Hippotherapy Center for Children.

“This program focuses on helping disabled children assimilate into society and uses the therapeutic benefits of horses to assist with this goal,” she said.

Alexandra Hezik, the daughter of Bernard and Judy Hezik, received $3,000 to travel to China. The self-designed Sustainable Agriculture and Asian Religions and Cultures major, who will graduate in 2016, is in the Honors College at WKU and the Chinese Flagship program. She will participate in an intensive Chinese language program in Harbin, China, through the University or Oregon.

“In my professional life after graduation, I hope to work in international food security and raise international interests in local food and organic farming,” she said. “I want to travel to as many places as I possibly can through my work, but China is one of the countries I would like to focus on. Having a better grasp of the Chinese language would provide a clearer channel of communication when it comes to learning from and speaking with locals and organizations.”

Asia Larkin, the daughter of Careasa Greer and Pierre Larkin, received $3,500 to travel to Tanzania. The Public Health and Dietetics major, who will graduate in 2016, will study public health in Tanzania and the Swahili language and culture.

“Not only will I be studying at the University of Dar es Salaam, I will be visiting different cities, hospitals and orphanages to interact with the local people and to gain academic, professional and personal strengths,” she said.

DaMario Walker-Brown, the son of Keisha Moody, received $2,500 to travel to Barcelona, Spain. The Architectural Sciences major will graduate in 2015.

Margaret Riney is an alternate for travel to South Korea. The Communications Studies major with a minor in Creative Writing will graduate in 2014. Her goal is to study at one of South Korea’s top universities, Yonsei University in Seoul.

Keeley Stephens is an alternate for travel to Greece. The Anthropology and Accounting major will graduate in 2016. Her goal is to become a bioarcheologist and study at a field school in Astypalaia, Greece, learning how to properly analyze remains of an ancient children’s cemetery.

Cheryl Kirby-Stokes, Coordinator of Nationally Competitive Opportunities for the Office of Scholar Development, said the best part of her job is working with highly motivated students who are pursuing their studies in a different context.

“The Gilman Scholarship allows them to not only fulfill academic and professional goals, but also gives the students the advantage of an experience that will make them more marketable once they graduate,” she said. “It’s exciting sending them off to study abroad and hearing their stories when they return.”