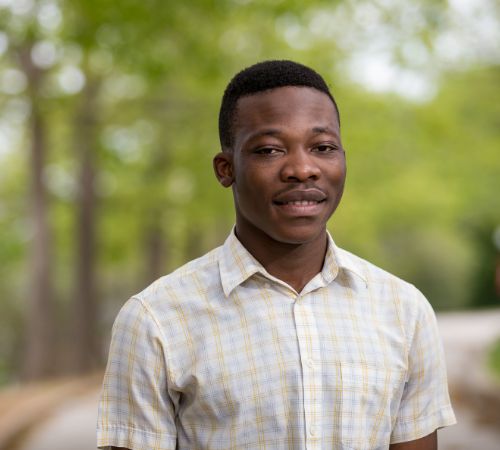 WKU student Abraham Tekoe is one of 120 undergraduate students selected nationwide for the Ernest F. Hollings Undergraduate Scholarship. He will receive up to $9,500 to support two years of academic study and a paid summer internship at a National Oceanic and Atmospheric Administration (NOAA) facility.

Tekoe, a senior graduating in Spring 2023 with majors in meteorology and geographic information systems, is the son of Edem and Adzowa Tekoe. A current resident of Clarksville, Tennessee, he is originally from the country of Togo in West Africa.

“Abraham is off to one of the best starts of any meteorology student in the history of our program,” said Dr. Greg Goodrich, associate professor and program coordinator of meteorology at WKU. “Abraham will be the rare student to have secured paid summer research experiences for his first three summers as a college student. The Hollings Scholarship puts him on track to be a highly competitive candidate for graduate school.”

Last summer, Tekoe completed a National Science Foundation (NSF) Research Experience for Undergraduates (REU) in alpine meteorology at the University of Utah. There, he worked with Dr. William J. Steenburgh and WKU alumnus Dallas McKinney on a project titled “Climatology of Snow-to-Liquid Ratio in the Wasatch Mountains of Northern Utah.” He will soon complete another NSF REU in Earth system science at Colorado State University.

Administered by NOAA, the scholarship honors the legacy of Sen. Ernest Hollings of South Carolina. Sen. Hollings played a major role in the creation of NOAA and the enactment of a number of laws to protect the environment, such the Sustainable Fisheries Act and the Oceans Act. The Hollings Scholarship is designed to increase undergraduate training in oceanic and atmospheric science and recruit students for public sector careers with NOAA and other sciences agencies at all levels of government.

After earning his bachelor’s degree from WKU, Tekoe will pursue graduate study to become a research meteorologist at one of NOAA’s Office of Oceanic and Atmospheric Research Laboratories.

“I would like to thank my parents for their love and support, especially in my decision to pursue a degree in meteorology,” Tekoe said. “I want to thank Dr. Melinda Grimsley and Dallas McKinney for helping through the application process. And finally, I want to thank Dr. Gregory Goodrich from WKU and Dr. Jim Steenburg from the University of Utah for taking their time to write my letters of recommendation.”

McKinney is the third student from WKU to be selected for the scholarship since 2013. He sought guidance from the Office of Scholar Development through their weekly Writing Lab to prepare his Hollings Scholarship application.