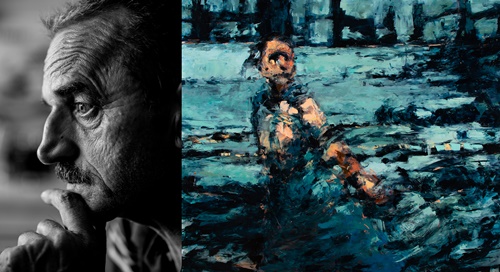 The exhibition is on display through April 4 at the Downing Museum, 4801 Morgantown Road. An opening reception and gallery talk will begin at 6 p.m. Feb. 7 and will feature foods unique to Bosnia and Herzegovina, courtesy of WKU’s Office of Global Learning and International Affairs.

Kenney and Petkus conducted research together in Bosnia and Herzegovina through the 2017 Zuheir Sofia Endowed International Faculty Seminar (ZSEIFS) fellowship program. Both were deeply affected by this experience and have found that similar content and underlying meanings have emerged in the resulting work.

For Kenney, his exploration of the social and cultural effects of the Bosnian War revealed a country and its people still in mourning while trying to return to some version of normalcy. The war and its effects could still be seen in the weary faces and distant stares, as well as in the shrapnel-pitted buildings dotting the urban landscapes. The war is commemorated in art, catalogued in centers that identify human remains, memorialized in cemeteries solely dedicated to genocide victims, and heard in the terrible stories told over and over of torture, rape, and killing, opening up old wounds in the attempt to come to some kind of understanding, and ultimately perhaps some measure of internal peace. Through his photographs, Kenney addresses these complex issues and their outcomes, with the goal of documenting each moment captured with sensitivity and honesty.

Petkus is a process-based artist who uses painting to explore ideas of struggle, perseverance, and the residues of trauma. The method is a sculptural use of mark-making as a critical, living action to develop her imagery and content, working through and past specific inputs toward their potentially larger meanings. Sources include sketches, photos, interviews, and notes, including those gathered during the 2017 ZSEIFS fellowship and her participation this summer in the Kuma International Center for Visual Art from Post-Conflict Societies Conference on Contemporary Art, also in Bosnia. By exploring ideas of struggle and survival, of vulnerability and the stubbornness necessary to persist, this work is intended as a mechanism to address the larger, most difficult and most human of concerns, while providing a space for contemplation, reflection, and understanding.

The IYO program is intended to provide the WKU campus and surrounding community with a rich, complex sense of place and interconnectedness through a year-long celebration of a specific country or region. The 2019-20 IYO Revisited an interim year that provides students, faculty, and staff with the opportunity to revisit previous countries (Ecuador, South Africa, South Korea, Bosnia and Herzegovina, and Cuba), reexamine connections that were established during previous IYO’s, and investigate new topics.

IEW 2019 (Nov 11-15) will feature co-curricular events and a classroom-based Dialogue Series to foster international learning and discussion across campus.

IEW 2019 (Nov 11-15) will feature co-curricular events and a classroom-based Dialogue Series to foster international learning and discussion across campus.