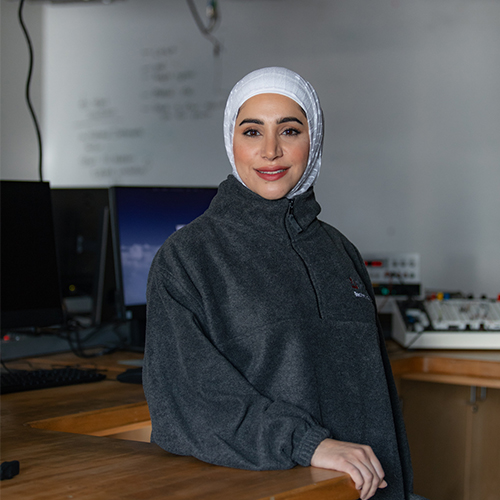 Zainab Alshatti, an international student and electrical engineering major from Kuwait City, Kuwait said she first learned about WKU from a family member back home.

"My husband’s cousin told me about WKU. He came here as a student in the 1990s and advised me to come based on his positive experience,” Alshatti said. “He mentioned that WKU was a great school and encouraged me to apply if I had interest.”

Alshatti decided that she was interested and began making plans to pursue her dream of earning a degree abroad. She had previously earned an electrical engineering degree from Kuwait Technical College, but wanted to continue her education in the engineering field overseas.

After a year of taking courses through ESLi at WKU, Alshatti was ready to begin her electrical engineering coursework.

She said she has enjoyed her time at WKU in part because of the personal attention she received from faculty. According to Alshatti, instructors in the labs have been especially helpful in presenting the material throughout her time as a student.

She has also enjoyed living in what she describes as a friendly and calm city.

“I love Bowling Green. I love the people here at WKU because they’re just so friendly. The International Office has been wonderful. They have helped me with everything. They work very hard to create a comfortable environment for all of the international students,” said Alshatti.

Now in her final semester, Alshatti recently completed her senior project which focuses on the electromagnetic field. Along with a group of classmates, Alshatti created a program using Javascript and HTML language that calculates electromagnetic measurements and allows the user to enter values and check calculations. She said that she hopes their program will allow future Hilltoppers a way to evaluate their work when solving complex equations.

Alshatti graduates with her bachelor’s degree this fall after five years at WKU. She will return to Kuwait and continue working in the engineering field at BioMedical Workshop supervising a team that will help ensure equipment is running smoothly for the business. She plans to eventually earn a master’s degree and said that her dream would be to come back to pursue it at WKU.

For more information about a degree in Electrical Engineering, visit https://www.wku.edu/ee/.