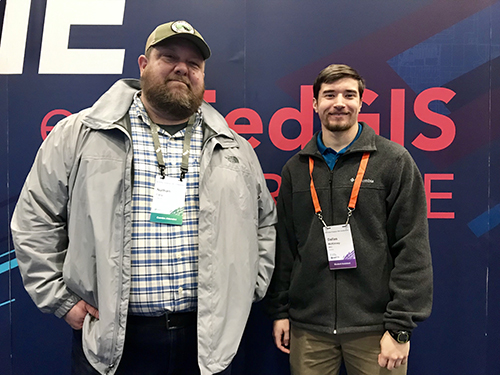 McKinney, a double major in Meteorology and Geographic Information Science, has interned with the National Weather Service in Paducah, assisting with community outreach events and conducting research on severe weather watches, and has interned as a forecaster with Weather Or Not Bowling Green, LLC (@wxornotBG). He’s also a part of the National Oceanic Atmospheric Administration (NOAA) Ernest F. Hollings Scholarship Program. This program provides successful undergraduate applicants with awards that include academic assistance (up to $9,500 per year) for two years of full-time study and a 10-week, full-time paid ($700 per week) internship at a NOAA facility during the summer.

Over 4,000 attendees from government agencies attended the GIS conference Jan. 29-30 in Washington, D.C.  This conference brings together government professionals to help direct their missions by showcasing geospatial infrastructure, spatial solutions and geographic information services, as well as addressing current and future GIS challenges.

This marks the second time that a WKU student has been awarded a scholarship for Esri’s Federal GIS Conference. Over the past 17 years, WKU has been awarded an average of two student scholarships annually to attend Esri’s International GIS Conference, which is held during the summer in San Diego. Only 60 students are selected each year from American universities and colleges for the competitive international conference scholarship and this conference hosts over 15,000 attendees.

From traditional map makers to current-day solution providers, the expected outlook in the growth of jobs in GIS by the Occupational Outlook Handbook (U.S. Bureau of Labor Statistics) is much faster than average. GIS is a multibillion dollar market and is on the list for High Growth Job Training under Geospatial Technology by the United States Department of Labor Employment and Training Administration.

For information about applying for an Esri student assistantship, or about GIS, WKU’s GIS programs, and GIS applications in business and industry, contact Kevin Cary in WKU’s Center for GIS at (270) 745-2981 or kevin.cary@wku.edu.