A Journey to Engineering 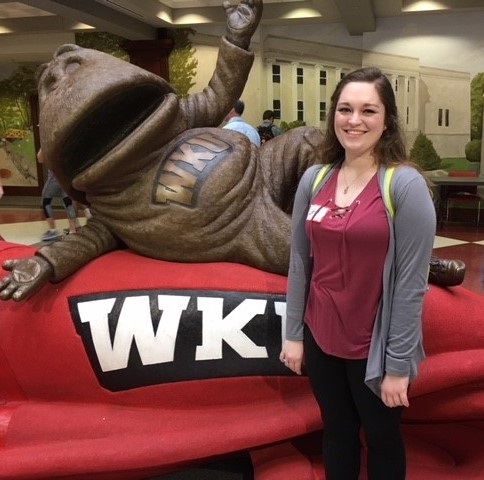 Addison Wethington is a freshman mechanical engineering student from Bardstown, KY.  She enrolled as a history major Western Kentucky University after graduating high school in 2017, and her journey into engineering has been long and marked with many changes.

Wethington reports that she expressed an interest in mechanics from an early age, wanting to spend time with her father and two uncles (both skilled auto mechanics) in their shop.  However, she says, she was discouraged from exploring this curiosity, and instead focused her academic pursuits on agriculture.  She was an active member of her local Future Farmers of America (FFA) chapter for four years, learning valuable interpersonal communication and public speaking skills.

Wethington reports that she even used these skills when she was part of a group of young women that encouraged her high school’s administrator to allow female students into a mechanics class.  Although Wethington never took the class, she remained connected to mechanics in this way.

Meanwhile, at the suggestions of an influential history teacher, Ms. Underwood, Wethington tool a job at Pat’s Appliance and Lawncare, a local appliance and lawn equipment repair shop.  There, Wethington reports that her mechanical and engineering interests were nurtured, saying, “As long as I paid attention, they [her coworkers] would teach me anything.”  She was even allowed to go on service calls.

Then, after graduating from Nelson County High School, Wethington enrolled at WKU as a history major with the goal of becoming a history teacher, inspired by the same Ms. Underwood that helped encouraged her get the job at Pat’s Appliance and Lawncare.

However, Wethington quickly decided that she wanted to change her major to engineering.  Although this may seem like a big jump, Wethington reports that her interest in the two fields is similar (“Math and history never change.”), but she would be afforded more security and stability as an engineer.

Because of her change of major, Wethington is currently working to complete required math courses before she can enroll in any more engineering courses, but is taking it in stride.  She plans to take a few exploratory courses next semester and says, “Broadening horizons is what I’ve decided college is about.”

Wethington’s eyes are on the future and has plans for the coming years.  She intends to complete at least two or three internships before graduation.  Her ultimate career goal is to work as an automotive engineer at Ford or Ariens.