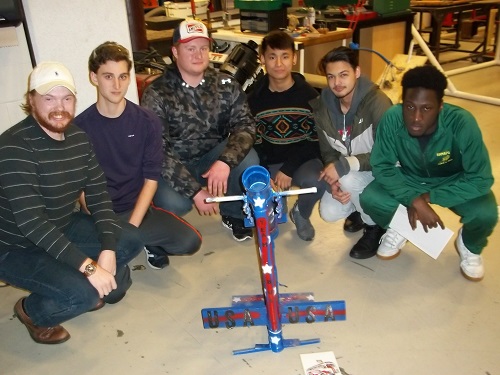 On Wednesday, March 8, small groups of students were gathered in the Integrated Applications Laboratory launching tennis balls into the air.  This was final testing and adjustments stage for many of the twelve groups in the freshman mechanical engineering courses.  In teams of five or six, students have been working on this project for two weeks, and preparing for their final— tennis ball launching competition.

These teams are tasked with building a machine that will accurately and quickly launch tennis balls into a box positioned at a distance between 10-35 feet away.  But, to make the challenge more difficult, students are rewarded for minimizing the weight of their machine, minimizing the size of the machine, and maximizing the distance launched and the number of successful hits.  Rules also required students to include a release mechanism for firing.

The methods that students are using vary.  Team Big Red called their machine a “cannon crossbow,” while Team Gear used air pressure for the launch.  Some teams used catapults, others used resistance bands, and several used springs.  The release mechanisms chosen were just as varied.

As students wrapped up the final changes and adjustments to their accuracy, stability, and distance, many discovered that the simplest solutions can be the most effective.  Tying a knot to decrease the length of a tension band or adding tape to the machine’s feet to stabilize it and give it grip are just two examples.