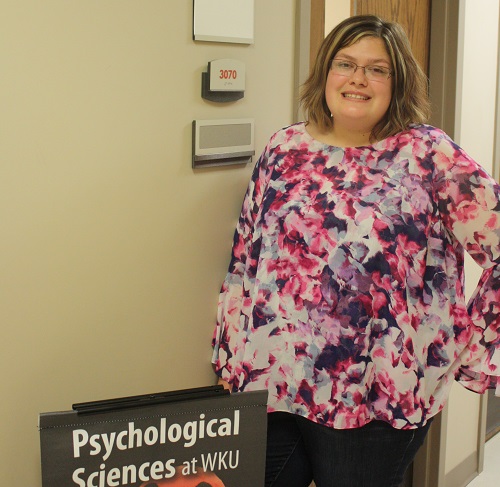 Shelby Bandel, a graduate student in Psychological Sciences at WKU, is a recipient of a 2017 Graduate Research Scholarship from the American Psychological Foundation (APF) and the Council of Graduate Departments of Psychology.  The scholarship is in the amount of $1000 and will be used toward the completion of Shelby’s master’s thesis.  Shelby’s research project is studying the relationship between sleep quality, emotion regulation, and suicide and self-injury in high school students, and specifically how poor sleep may lead to negative health and psychological outcomes in adolescents over time.

Shelby is from Cheyenne, Wyoming and graduated with a B.A. in Psychology from the University of Wyoming where she completed an honors thesis on the patterns of non-suicidal self-injury in college students.  She came to WKU to work with Dr. Amy Brausch in the Department of Psychological Sciences to continue researching self-injury and suicide behaviors in adolescents and young adults. Shelby has been active in research during her time in Dr. Brausch’s lab and presented at two national conferences last year, and is on track to present at two national conferences again this year. Shelby will be applying to PhD programs in Clinical Psychology this fall, and her long-term goal is to become a Licensed Psychologist and provide evidence-based treatments to individuals in rural areas with a focus on suicide prevention.

The American Psychological Foundation is an organization that funds grants for early career psychologists and graduate students that are using research in psychology to improve the lives of others.  The APF is part of the American Psychological Association, which is the largest national professional association for psychologists.  Each year, APF awards up to 22 research scholarships, most often to doctoral students in psychology at research-active universities.  Shelby’s receipt of one of these awards as a master’s student is quite an accomplishment.

Dr. Amy Brausch, Shelby’s graduate research mentor, is an Associate Professor in the Department of Psychological Sciences, and has been building her reputation as a leading researcher in the field of adolescent suicide and self-injury.  She currently has an Investigator Development Award from the Kentucky Biomedical Research Infrastructure Network to study the development of self-harm behavior in adolescents across time, and is co-investigator on a grant from the National Institute of Mental Health to study the progression of self-harm behavior in college students. Dr. Brausch’s students have presented at both national and international conferences, and many have been accepted into PhD programs in Clinical Psychology.