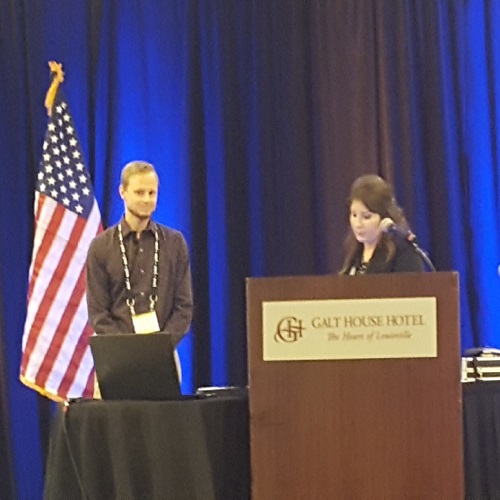 WKU senior Geographic Information Science (GIScience) major Terry Bearb of Lafayette, Louisiana has been awarded a $1000 scholarship by the Kentucky Association of Mapping Professionals (KAMP).  Ms. Meghan Dunn, President of KAMP, presented the award at this year’s Kentucky Geographic Information Systems (GIS) Conference, held at Louisville’s Galt House during the first week of September.  In addition to the scholarship, Bearb’s conference registration fees were waived and his KAMP membership renewed for next year.

Bearb is a veteran of the US Navy, where he worked with the National Geospatial-Intelligence Agency.  Bearb credits growing up in a family of land surveyors for sparking his love of maps.  Now as a GIScience major, he is interested in the different methods for analyzing geographic features and becoming a certified GIS Professional.  His career goals are to be a GIS Analyst for the government and ultimately “…fulfilling a government seat once again protecting the freedoms of the nation.”

Since KAMP began offering the scholarship in 2013, four of the five awardees have been students of WKU’s GIS program, and have found employment after graduation as GIS/Data Analysts for such entities as Hyrdomax USA, Kentucky Division of Stormwater Management, and Parallon Business Solutions.  The scholarship is a way for GIS professionals in the Commonwealth to assist a deserving student studying GIS at a higher education institution in Kentucky.

For information about applying for next year’s KAMP’s scholarship, or about GIS, WKU’s GIS programs, and GIS applications in business and industry, contact Kevin Cary in WKU’s Center for GIS at (270) 745-2981 or kevin.cary@wku.edu. Additional information also available at http://www.wku.edu/gis/