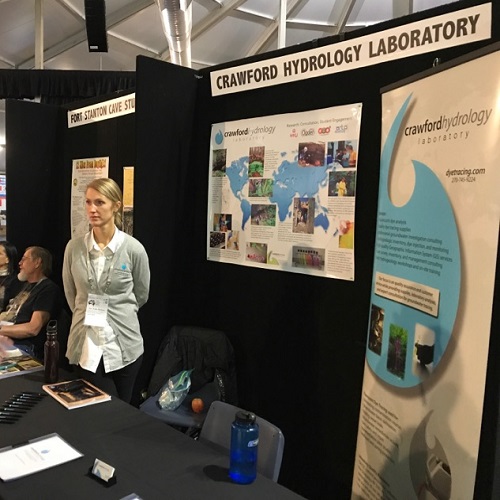 Several faculty, staff, and graduate students of the WKU Geography and Geology Department recently attended the 17th International Congress of Speleology in Sydney, Australia where they presented research on a variety of topics related to caves, karst, and water resources.

The International Union of Speleology conducts this international conference every four years at various locations worldwide. The conference brings together a diverse group of cave explorers, scientists, students, cartographers, photographers, and artists. The conference provided these groups an opportunity to present research; participate in photography, art, and map salons; visit vendor booths and exhibits; attend field excursions; as well as network and interact with professionals and research collaborators from across the globe. This year, the conference theme, “Caves in an Ancient Land” highlighted the geologic history of Australia while presenting various themes of modern speleological study and exploration.

The WKU attendees also participated in an outing to the Blue Mountains and took tours at nearby Jenolan Caves. During these outings, WKU representatives were able to explore the unique Australian karst landscape and compare it to the karst landscape of Bowling Green, Kentucky. Dr. Pat Kambesis was also recognized as Best of Show and First Place Winner in the Cartography Salon for her map of Barrel Cave in Jackson County, Alabama.

CHL hosted an educational exhibit about fluorescent dye tracing at the meeting, which was well-visited and led to many in-depth discussions of previous research, advancements in methodology, potential collaboration and training opportunities, as well as the CHL scholar exchange program. Fluorescent dye tracing is one of the best methods available for studying groundwater flow in karst aquifers and is often instrumental in the protection and management of karst groundwater resources.

Both CHL and CHNGES are research centers within the Applied Research and Technology Program at WKU’s Ogden College of Science and Engineering. CHL is a leading institute both nationally and internationally for karst groundwater investigations offering professional consulting, fluorescent dye tracing products, analysis, training, and outreach to scientists,  environmental and engineering firms, and government agencies. CHNGES is an interdisciplinary center founded in the environmental geosciences with its focus at the nexus of climate, water, sustainability, and human-environmental interactions. The center houses multiple labs, including HydroAnalytical commercial water analysis lab and an eye-tracking and environmental education studio, focused on providing student training and professional services related to these topics to the community, industry, and its partners.