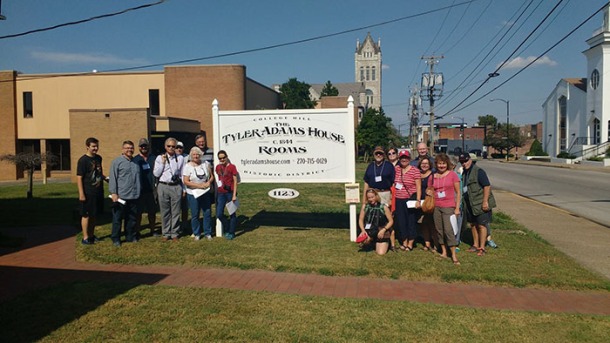 Conference participants also visited “The Castle” on College Street near the WKU campus.

For Dr. Gripshover’s tour, participants explored the cultural and historical landscapes of Bowling Green. The emphasis of the tour was on how race, ethnicity, immigration, Jim Crow, technology and transportation helped shaped the downtown of today. As part of the afternoon tour, participants were able to visit the Tyler Adams House (1123 State St.) owned by Tom and Stephanie Morris. The Tyler Adams House received the “Landmark Building” award in 2016 from the Landmark Association of Bowling Green and Warren County. Kudos to Tom and Stephanie Morris for their successful restoration and adaptive reuse of this historic building. The house was built in 1844 and is one of the oldest residences in the city. It began as a single-family residence but over time was transformed into a boarding house and today operates as an “Airbnb.” The same could be said for another historic home on the tour, “The Castle” (1310 College St.), which was built in 1876 for Erasmus Potter, a member of a wealthy and influential Warren County family. The Potter name should sound familiar — Potter College is a part WKU. Today “The Castle” is owned by Steve and Patsy Morgenthaler and serves as their residence as well as a rooming house for WKU students. This year, “The Castle” won the Bowling Green Landmark Association “Jean Thompson House Award.”

For more about Cultural Geography and the Department of Geography and Geology at WKU, contact Dr. Gripshover at margaret.gripshover@wku.edu.