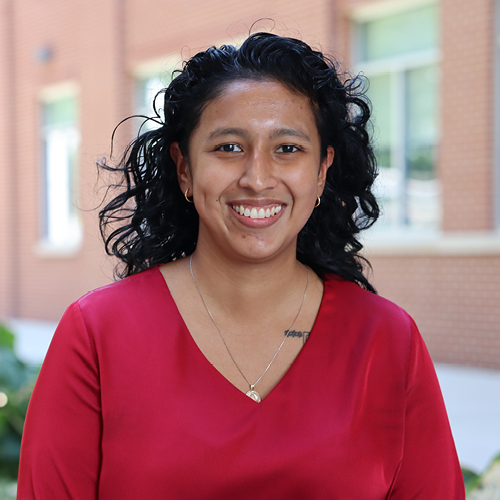 Hernandez was inspired to pursue a graduate degree at WKU by Dr. Amy Brausch, a professor in the Psychological Sciences program. Along with assisting Hernandez in navigating the application process, Dr. Brausch’s research in suicide and self-injury has always been an interest of Hernandez’s.

“Working in her lab the past two and a half years has inspired me to dedicate my academic and future career into furthering the research in suicide and self-injury,” Hernandez said.

Hernandez said that their research is unique because of its focus on racial, gender and sexual minorities.  “Much of the current evidence available about suicide and self-injury has historically been gained by using mostly cisgender, white, and heterosexual populations.  This makes the evidence gained from them not generalizable to the populations I focus on.”

As an undergraduate student at WKU, Hernandez attended the Midwestern Psychological Association Conference where their poster was awarded a Psi Chi Regional Award and was also highlighted for having a minority group focus. As a result, Hernandez was inspired to apply to a summer school in Amsterdam where other suicide researchers from around the world also presented.

“The summer school in the Netherlands was an amazing experience. It was exciting to see the different ways people are researching suicide. It definitely reaffirmed my passion for the topic.  It also inspired me to discover new ways to help the people in my community,” Hernandez said.

Hernandez was also granted a Distinguished Minority Fellowship at WKU which allows them to obtain their master’s degree without having additional financial burdens.

In addition to their research in suicide and self-injury, Hernandez also enjoys gardening, especially marigold flowers.  They are also active in the Hilltopper Organization of Latin American Students, which is an organization on campus that celebrates students with backgrounds in Latin American countries. A future goal of Hernandez is to start a nonprofit that focuses on helping LGBTQIA+ Latino youth who are struggling with mental disorders.

Hernandez’s research is meant to better understand disorders that often go undiagnosed within minority populations and to advocate for these groups. Fighting the stigma associated with mental health and minority groups is often the largest obstacle.

“My ultimate goal is to change this mentality. My work fights to bring minority groups to the forefront with the hope that it will inspire them to be more open-minded to destigmatize mental health,” Hernandez said.