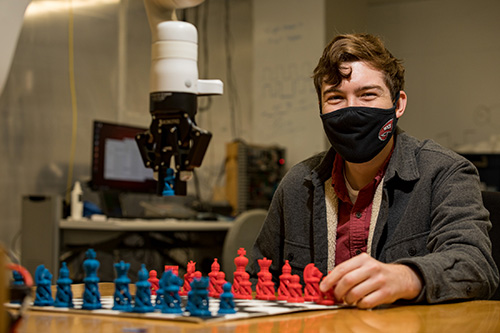 Being around WKU’s campus for nearly as long as he can remember with band events and engagement in activities presented by the WKU School of Engineering and Applied Sciences, Murphey Kilgore, a senior from Bowling Green who studies Electrical Engineering with minors in Systems Engineering and Mathematics, said those early experiences with WKU ultimately helped him decide what he wants to do long term.

Kilgore chose WKU based on its strong cost-value proposition and the many opportunities the campus presents for him to be involved. He is involved in a grand suite of activities focused in music and engineering, including Big Red Marching Band, Phi Mu Alpha, IEEE, Tau Beta Pi and the Center for Energy Systems.

During his time at WKU, Kilgore grew to appreciate that class sizes allow students to really know their professors and vice-versa. He said those relationships truly develop into something impactful. This is the way he started working at the WKU Center for Energy Systems – after being in class with School of Engineering and Applied Sciences Professor and Founding Director of the WKU Center for Energy Systems Farhad Ashrafzadeh, also known to many students as “Dr. A”.

“The opportunity to be involved made me motivated and interactive. This really changed my perspective on the college experience and helped develop my work ethic,” Kilgore said.

According to Kilgore, WKU helped him develop lasting connections all across campus.

In his work as a Student Research Assistant at the WKU Center for Energy Systems under the direction of Dr. A., Kilgore interacts directly with engineering teams from companies such as Samsung and Tempur-Sealy by participating in project development and management meetings as well as the research work for those companies. In the process, he is gaining broad and invaluable experiences, such as coding.

Kilgore is wrapping up his WKU experience this semester with a senior project which is supported by a National Science Foundation-funded collaboration focused on the autonomous delivery of routine items in medical settings that looks to help reduce the spread of infection in hospitals.

After completing his undergraduate degree, his sights are set on pursuing a graduate degree in Electrical and Computer Engineering.

Beyond his work in his major and playing the baritone sax in several WKU bands, Kilgore greatly enjoys several hobbies, including cooking and making great coffee and tea. “I like to try cooking lots of new dishes to expand my palate and have some adventure,” Kilgore said.

Kilgore said the Hilltopper Spirit recently grew new and deeper meaning for him, as he and his roommates’ rental house was severely damaged in the tornado outbreak on December 11. Reflecting on this, Kilgore expressed that to him the Hilltopper Spirit means holding WKU to be above other places and being excited to be here and “support the team to overcome adversity.”

To learn more about earning a degree in Electrical Engineering at WKU, visit https://www.wku.edu/ee/.

To learn more about the WKU Center for Energy Systems, visit https://www.wku.edu/ces/.