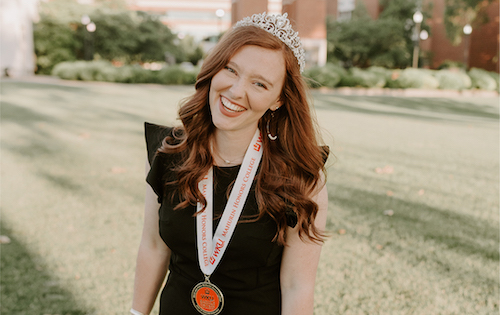 Ally Taylor (MHC ‘20) embodies the spirit of WKU and in 2020, she was selected as Homecoming Queen. While studying accounting, Ally served The Mahurin Honors College (MHC)and WKU in many areas. She was an Honors Topper, H4 counselor, Student Athlete Success Center Tutor Coordinator, a tutor and an academic advisor for a men’s basketball team, a member of Delta Sigma Pi through the business college, a member of Omega Phi Alpha service sorority, and a performer in the Big Red marching band. Being so deeply immersed, Ally developed a passionate pride in WKU.

During her homecoming interview she stated her favorite memory is, “every game day, I get to go and run out on the field with 300 of my closest friends and perform the fight song and truly embody what WKU means to everybody in the community. I always tried to take a second while I was on the field and look around and just see all the people even if I didn't see their face, but just see all these people that I get to be a part of their story in a sense.”

Ally explained it was difficult to see herself fitting into the role of a homecoming queen: “I think, to me, being homecoming queen meant representation of all kinds of people. I was a geek, I really was. Who would have thought that a marching band geek would win Homecoming? This title allows me to represent a wide range of people across campus and demonstrate to others that you really can be in marching band and be in a sorority, etc. Never let people label you into a singular box; you can be a part of all these organizations. WKU will support you like it so graciously did for me.”

Ally is currently an Associate at Dean Dorton in Lexington, KY. We are so proud of Ally and thankful for all she has done for Western.

The HSPPS will require vaccination against COVID-19 for all staff, contractors working directly with children, and volunteers by January 31, 2022.