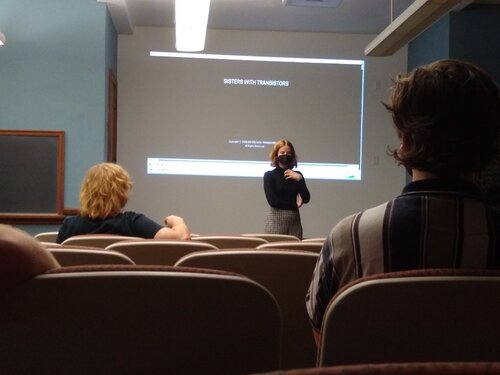 WKU students may recognize the 1920s for jazz and swing music, but as the audience of the latest Gender and Women’s Studies screening found out, it is also known for the birth of electronic music.

From its early origins until recent decades, electronic music was typically constructed on large machines consisting of several plugs, wires, and buttons that would construct sound. But while the cumbersome machines were not easy to ignore, the women behind them were.

“I think the really important thing about this film is how it shows the liberatory potential of both sound and technology and how women were able to in the past, harness that in order to create new kinds of music and sounds that just had never been created before,” Dr. Benn said.

After being introduced by Dr. Hovet, who ran the technical aspects of the screening, Dr. Benn gave a short presentation of why this history mattered. The word “genius”, she explained, in music or any other area, has typically been reserved for men. She drew an example of data from ratemyprofessor.com, published that very day, which identified the word genius as given to male professors in the music field at a rate of 142.36 per million words, but for female professors it only appeared at a rate of 15.8 per million words.

The enthusiastic crowd was then engulfed by the effervescent waves of sound presented by the women who made pioneering strides in the field. A Q and A followed in which members addressed their awe at the work these women did and how they were allowed to be largely forgotten. The crowd’s reaction was further proof of the importance events such as this have.

“It's really important for our students and our community to be exposed to these new ideas, so screenings like this are a great way to sort of dip your toes into this musical universe that we may not have access to otherwise on campus,” Dr. Benn stated.