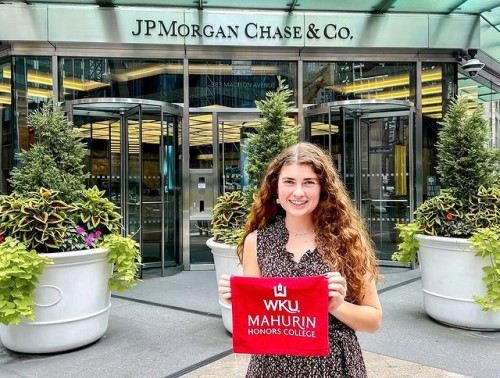 Zena Pare (MHC ‘22) has embraced every aspect of The Mahurin Honors College’s (MHC) vision of  “ascend towards excellence” in her educational pursuits. Zena is triple majoring in International Business, Economics, and Corporate Organizational Communications as well as minoring in American Sign Language studies.

In addition to her work inside, Zena has completed her CE/T project titled: Banking on Her: The Effects of Microfinance on Women’s Autonomy in Developing Economics. She analyzed microfinance in many different developing countries and different embodiments of what women’s autonomy could be as dependent variables. She realized there was a need for holistic research, most of the known data is on specific countries, not how microfinance affected women’s autonomy as a whole.

Outside of the classroom, Zena strives to be heavily involved on campus, including serving as an HonorsTopper since 2019, a WKU Admissions Ambassador, and serving on the Honors Development Board as the MHC class of 2022 representative. Zena was president and vice president of Women in Business and was on the Gordon Ford College of Business and the Student Advisory Council.

Zena’s impressive resume and thesis project landed her a coveted internship with J. P. Morgan as an Investment Banking Summary Analyst in power and renewables.

“I have had a great experience at the firm as a whole and in the team I am with,” states Zena. “The powerful space is very exciting because there are a lot of changes happening and the work is very future focused. It is amazing to be able to contribute to the greater ideas and themes that are shaping the world right now.”

Zena’s internship with J.P. Morgan is located in New York City which has been Zena’s dream home since she was little.

“If having an internship in a big city is your dream, do not give up on it.  New York City was my dream for years and years. If you know what you want, then just go after it!”

As with anything worth pursuing in life, hearing several “no’s” come with the “yes’.”

“I've applied to so many things. A lot of times, yeah, you get a rejection, learning from the rejection is key.  There really is not much of a downside to applying for as many things as you are passionate about.”

She concludes that as scholars we must always give people the chance to say “yes” to us, so embrace applications and rejections as a normal aspect of growth.

We continue to be inspired by all of Zena’s accomplishments and wish her the best in her future projects!