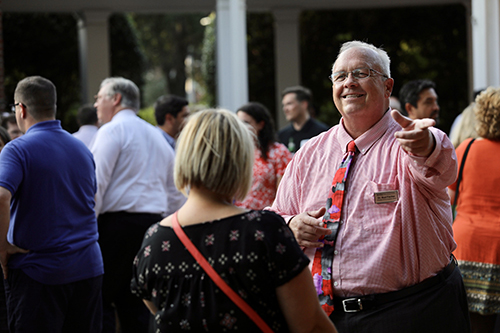 Provost and Vice President for Academic Affairs Robert ‘Bud’ Fischer hasn’t been in Bowling Green long, but he said he is already feeling right at home on the Hill.

Fischer began as Provost and Vice President for Academic Affairs on July 6. He came to WKU from Middle Tennessee State University where he served as the dean of the College of Basic and Applied Sciences for nine years.

Fischer said he is honored to take on the role of Provost and Vice President for Academic Affairs and feels prepared for the responsibility due to his previous positions.

“It’s an incredible honor to be entrusted with the academic area of this institution. I’m excited, and I’m honored that this institution would allow me to be the Provost and help move this institution forward. I come to work every day thinking, ‘How do we make the experience better on the academic side of the house?’” Fischer said. “The previous positions I’ve held at other institutions have trained me well. The reason I say that is because all the things that Academic Affairs does as a whole - I’ve done before but on a smaller scale.”

In this role, Fischer works with the WKU President, members of the President’s Cabinet, college deans, and academic support leaders to ensure students get the best quality education possible.

“A wide variety of things are coordinated out of this office, specifically strategic and operational oversight of the Division of Academic Affairs. I view it as an opportunity to help move the university forward and in doing so creating a better learning experience for the students,” Fischer said.

Getting to know WKU’s community of faculty, staff, students, and alumni is the top priority for Fischer.

“Since I’m brand new, the first thing is just getting a sense of where the university is and getting a handle on the culture. It’s also important to get an idea of where the campus community sees that we are and what they see as needs moving forward. I’ve talked to probably 350-400 people, what I see is that there are some trends. There are some things that everybody mentions when our office talks to them. For many of them, they’re already being worked on by the campus community, so a lot of it is just moving and growing those things as we move forward.”

WKU’s motto, “The Spirit Makes the Master” celebrates student success through hard work and dedication. Growing student success is one large area of focus for Fischer, and it’s one that he is confident in helping build because of his own experience as a student.

“I grew up in Buffalo, New York. I was the first of my family to go to college, so I was a first-generation college student. We were also a lower income family, so I understand that and can relate to how big an opportunity going to college is. It can also be a scary opportunity and a tough transition. What I tell students is that you have to figure out how to be successful. If you can be successful, you can change your life and what you will do for the rest of your life. And you’ll change your family’s life,” Fischer said. “Education changed my life in a way that I would never have thought it would as a kid growing up in Buffalo. I would have never thought that I would be sitting some day at a desk as Provost of a university. That wasn’t a dream of mine, but as time went on, it became a dream because of education. It’s really important that you dream and that you go after those dreams.”

Working with faculty to help equip them to better serve their students and to grow in their chosen endeavors is another highlight in Fischer’s new role.

“It means that we will be together at times – I hope a lot of times to have discussions and to think about ways to solve problems. It really is about working together,” Fischer said.

One of the most exciting things for Fischer in his new role is helping others get to where they want to be in the future.

“That’s not just students. I’m excited to help students get the best quality education to ultimately do what they really want to do in the future, but I’m also excited to help faculty and staff continue to grow and change in their career paths. Students are at the heart of what we do in my office, but faculty and staff are also very important. As their careers grow and change, what they would like to do may change, and their interests may change. Academic Affairs gets to help facilitate those changes,” Fischer said.

While Fischer spends much of his time working, he said he is looking forward to exploring Bowling Green and the surrounding area. Some of his hobbies include arts and entertainment, sports, and spending time outdoors.

“My wife and I liked Bowling Green because it fit the whole gamut of things we were looking for, so we were excited to move here. I like to spend lots of time outside when I’m not working. I enjoy the outdoors even if it’s a short walk or just sitting outside, and I love the fine arts. We go to a lot of concerts and plays. I am a sports junkie. Being on a campus is the perfect place to be if you love sports, - and I really love sports!” Fischer said.

Fischer admits that having recently moved from Tennessee, he still hasn’t unpacked his book collection, but that reading is his favorite thing to do to recharge.

“I love reading. I am usually reading non-fiction, specifically history. Reading helps me stay grounded and helps me relax. I find history fascinating,” Fischer said. “I still read books. I like the feel of the paper and seeing the progress of getting through the pages. Some people think that reading paper books is strange, but I still buy books! I love to learn from reading.”

Spending time with family is also important to Fischer.

“My wife, Anita is here with me. I’ve dragged her across the country a couple of different times, and she’s come with a smile. She really is the heart of our family. I have an adult daughter named Sarah and a teenage granddaughter named Kelsey. My daughter and granddaughter live in Illinois, so if I travel, that’s where I’m usually headed,” Fischer said.