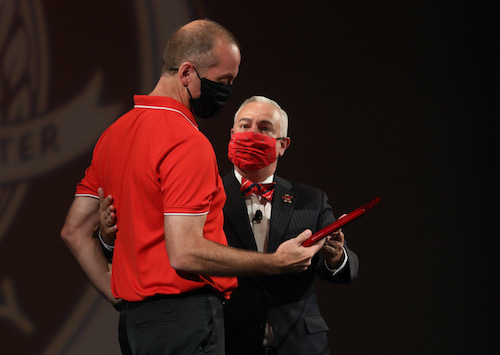 WKU Volleyball Coach Travis Hudson doesn’t like surprises, but he got one Monday morning when he was recognized as this year’s recipient of the Spirit of WKU Award.

Members of the WKU Volleyball team joined President Timothy C. Caboni on stage at Van Meter Auditorium to present the award to Hudson as part of the 2021 Faculty and Staff Convocation. (More: Convocation website; photo gallery)

Hudson, a 1994 WKU graduate who is beginning his 27th season as head coach, challenged the WKU community to remember “this place stands on a beautiful positive spirit of people helping people.”

“I think that’s the lesson we all need to understand as we interact on this campus every day,” he said. “Our world is one that shines the light on all the negativity, but if we will simply shine the light on all that is good and positive every day in the students that walk across this campus and the faculty and staff that walk across this campus, we need to understand that it is going to impact them in the same way and make them want to impact the people around them in an even greater way and in an even more positive way.”

In her letter of support, Dr. Elizabeth Shoenfelt wrote, “He has built a team culture that cultivates personal values that are reflected on and off the court. The team has six core values -- respect, trust, hard work, accountability, positivity and a team-before-me attitude -- that guide their behavior regardless of where they are.”

President Caboni noted that Hudson’s impact goes beyond his program’s record of success on the volleyball court and in the classroom.

“What we all know is that the Spirit of WKU takes heart,” President Caboni said. “And if you know Travis, you know his heart.”

Hudson became the nation’s youngest head coach in 1995 at the age of 24 and began building a program that 26 years later boasts a 75% winning percentage and has appeared in 13 NCAA Tournaments. Hudson has won numerous Coach of the Year honors and was inducted into WKU’s Hall of Distinguished Alumni in 2020.

“We have a Spirit here on the Hill that can never be broken and will only be enriched as time goes by,” Hudson said.