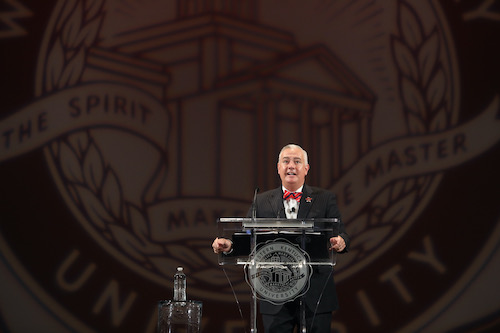 Western Kentucky University President Timothy C. Caboni delivered his annual Convocation address Monday in Van Meter Auditorium, marking a return to an in-person Convocation after last year’s address was delivered virtually in response to the COVID-19 pandemic. In his address, President Caboni provided a recap of the 2020-2021 academic year, while also previewing the year to come.

President Caboni praised the efforts of faculty and staff in delivering course content in innovative ways during the previous academic year. “We delivered our classes. We conducted research. We provided the WKU experience. And we continued to meet our mission as a student-centered, applied research university,” President Caboni said. (More: Convocation website; photo gallery)

He also applauded the accomplishments of a number of student organizations on campus despite disruptions to normal operating procedures. President Caboni referenced the national championship success of WKU’s Forensics Team and WKU Cheerleading, as well as the WKU School of Media’s third-place finish in the Hearst Journalism Awards Program as examples of the resilience and ingenuity on display last academic year.

In addition to organizational and team accomplishments, President Caboni lauded the individual accomplishments of a number of WKU students. He highlighted the successes that students experienced earning nationally competitive scholarships last year. He also pointed to student research activity spanning multiple disciplines as an example of the institution’s commitment to providing students with applied research and learning opportunities, as well as WKU students’ ability to succeed during unusual circumstances.

President Caboni referenced several new facilities and programs on campus designed to facilitate student success. Among these are the Commons at Helm Library, scheduled to open during the fall semester, and WKU’s First Year Village, which will house a number of academic and interest-based living, learning communities (LLCs). “They will change the way we engage our students and create opportunities for learning that extend to the 150 hours our students spend outside the classroom each week,” he said. “They will facilitate academic integration and enhance student success.”

Convocation also provided an opportunity to introduce five new campus leaders to the rest of WKU’s faculty and staff. Dr. Ethan Logan began his career at WKU in May 2020 as Vice President of Enrollment and Student Experience. Dr. Ranjit Koodali also began his WKU career last year as Associate Provost for Research and Graduate Education. Dr. Robert “Bud” Fischer began as WKU’s Provost and Vice President of Academic Affairs in July. Two new academic deans also started their WKU careers this summer. Dr. David Brown became the dean of the Ogden College of Science and Engineering, and Dr. Terrance Brown took over as the dean of Potter College of Arts & Letters.

President Caboni updated faculty and staff about the Diversity, Equity, and Inclusion (DEI) initiatives underway at WKU, as well as plans for the current academic year. He cited several initiatives developed by the university’s DEI Workgroup aimed at reducing biases and ensuring all faculty, staff, and students are treated with dignity, respect, and equity. Additionally, he highlighted the Workgroup’s efforts to update university hiring procedures in order to recruit and hire more minority applicants. “The composition of our faculty should represent our commitment to institutional diversity,” he said. To aid in those efforts, President Caboni announced the Targeted Opportunity Program, a fund designed to enhance the university’s recruitment of underrepresented faculty.

Additionally, he discussed the challenges posed to student recruitment during the last academic year and stressed the importance of establishing personal connections with prospective students throughout the recruitment cycle. He also announced a new investment of $375,000 to aid academic colleges in their recruitment efforts.

In his address, President Caboni also committed to a 2% salary increase pool this year. “Because of your performance, because of the investment from the state legislature, and because of a modest tuition increase, we are able to provide this pool,” he said.

Hudson has served as WKU’s Volleyball coach for 26 years since he became the nation’s youngest head coach in 1995 at the age of 24. Since that time, WKU’s team boasts a 75% winning percentage.

Hudson has been named a conference coach of the year eight times and has received seven American Volleyball Coaches Association South Region Coach of the Year awards. He has led his teams to 16 regular season conference championships, 11 conference tournament championships, and 13 NCAA tournaments. The 2020-2021 WKU team finished the season ranked 16th in the nation.

“What we all know is that the Spirit of WKU takes heart,” Caboni said. “And if you know Travis, you know his heart.”