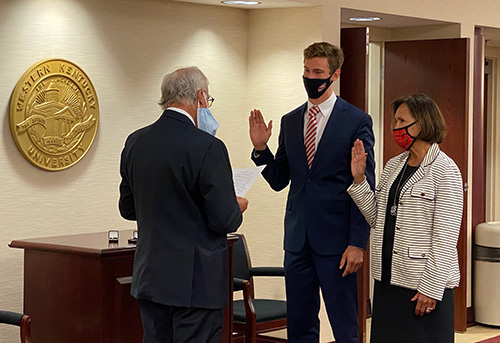 During its quarterly meeting on Friday (August 6), the Western Kentucky University Board of Regents approved the renaming of Northeast Hall to Munday Hall. The change honors Margaret Munday, WKU’s first African American student to enroll at the institution. Munday Hall will be the first building on campus named after an African American.

The Board also approved the philanthropic naming of the ROTC Cadet Lounge in Diddle Arena as the 1 LT Eric D. Yates Cadet Lounge. The naming honors Eric Yates, in recognition of his leadership in WKU’s ROTC program and his service to his country.

Also, the Board approved the philanthropic naming of the Ted Hornback W-Club Room in Diddle Arena. This naming is in recognition of the generous gifts of W-Club members and honors Ted Hornback, a former student-athlete, coach, staff member and administrator at WKU.

The Board also approved a number of personnel items, as well as the following new academic programs: