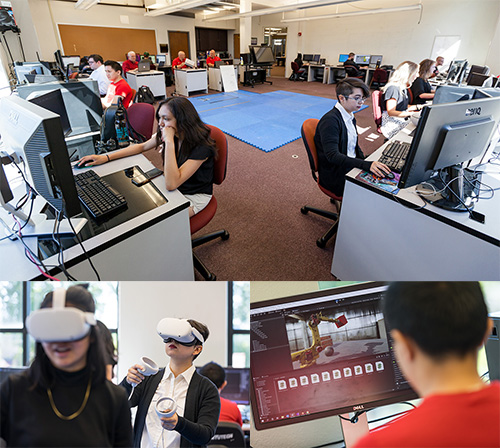 Whatever term you use for it, a new digital world is taking shape this summer in the XR Research Lab on the third floor of the WKU’s Industrial Education Building.

Opening the door to this new reality is as simple as putting on a VR headset and entering the virtual space created by an interdisciplinary team of WKU students and faculty in the Ogden College of Science and Engineering and Potter College of Arts & Letters.

The XR project is also opening the door to changes in industrial manufacturing, along with new opportunities for students. “We really are focused on creating the largest and most interdisciplinary research project on campus,” said Dr. Greg Arbuckle, professor in the School of Engineering and Applied Sciences.

The idea for the lab began earlier this spring after Unipres USA in Portland, Tennessee, donated a robot to WKU’s Manufacturing Engineering Technology program. Unipres used the large robotic arm in its production of automobile frames.

The question for Dr. Arbuckle became how to make the robot work and how to use it for WKU’s manufacturing program. “One of my colleagues asked, ‘Have you looked at any virtual reality?’” Dr. Arbuckle said.

“We realized we had an opportunity this summer to begin some collaborative work and start building the foundation of what we would hope to become,” Dr. Arbuckle said.

The faculty members recruited the following nine students: Steffen Bolz, a graduate student in Engineering Technology Management from Bowling Green; Trevor Brown, a graduate student in Computer Science from Russellville; Apirada Chetawatee, a Gatton Academy senior from Murray; Chris Nalani DiMeo, a post-baccalaureate student from Bowling Green who graduated from WKU in May 2020 with a major in Advertising with a concentration in Interactive Design, a minor in Graphic Design and a minor in Journalism Writing; Zachery Mers, a sophomore from Bowling Green who is majoring in Computer Science with a Game Design certificate; Diego Alberto Minaya Diaz, a senior from Bowling Green who is pursuing a major in Computer Science, a minor in Computer Animation and a Game Design certificate; Isabel Ocegueda, a Gatton Academy senior from Fort Knox;  Sarah Terry, a senior from Lebanon, Tennessee, who is pursuing a Bachelor of Fine Arts (BFA) in Graphic Design with a Game Design Certificate; and Madison Whittle, a junior from Scottsville who is pursuing a BFA in Graphic Design and a Certificate in User Experience.

“We’re trying to recruit a diverse population of students who traditionally are not necessarily focused on some of those more technical skill sets in the manufacturing area or computer science but bringing them to that through the more graphical-based environment,” Dr. Arbuckle said.

That’s what excites Simpson. “It’s completely reshaping the possibilities for art and design students who are going through our program,” he said.

The art students can design the backgrounds and other real-life scenes used in the virtual world. “Everything we are doing right now is a huge part of the artistic design to make that thing as true to life as possible,” Dr. Arbuckle said.

As an undergraduate, DiMeo researched innovations in augmented reality development for an Honors Capstone paper, The Oceans Above Us: An Augmented Reality Experience, and created an augmented reality experience that allows anyone with a smartphone to turn their room into an interactive virtual aquarium. “At the WKU VR Lab, I focus on turning non-VR games and experiences into immersive and interactive virtual reality applications,” DiMeo said.

DiMeo and the other students are collaborating to create the virtual world in the lab’s Unity programs.

For example, Terry is focusing on 3D development, software design, gamification, UX/UI, and creating immersive virtual worlds that users can interact with; Ocegueda is creating interactable VR environments and manages scenes, user interaction, game mechanics and more through code; Whittle is working on 3D modeling project-specific assets, ensuring an effective user experience and developing the lab’s social media and logo; Mers is designing the environments for the WKU XR Lab’s Unity programs, which range from a recreation of the lab to a large, open valley used in the creation of an experimental golf game; and Minaya Diaz is working on the graphics, mechanics and logic of the robot inside Unity.

Even though this summer’s project focuses on developing the program for training and operation of the industrial robot, the sky is the limit for other projects and opportunities. The group has already been in contact with other groups on campus to develop training programs that take advantage of XR technology.

“Anything you can build in virtual reality is an option -- manufacturing, video gaming, education and training programs or health and safety,” Dr. Galloway said. “It’s all the same software.”

Brown, who works as a Systems Analyst at Logan Aluminum, is writing and developing his master’s thesis, An Implementation of Mixed Reality Technology for Field-specific, Manufacturing Education and Training. He intends to develop a mixed reality experience for his workplace for specific job training. “I hope to help accelerate training Operating Technicians on specific jobs, making them more aware and comfortable with their working environment before they even set foot on the floor,” he said.

The faculty members hope to keep most of the summer students through the 2021-22 academic year and add about 12 more.

“We hope to recruit students who would not traditionally go into areas such as graphic design, manufacturing engineering technology or computer science,” Dr. Arbuckle said. “A student who likes video games or virtual reality type environments could see the possibility of going into this field. Or a student who is artistic could come here and do graphic design and add computer science or manufacturing along with it as we build those skill sets up to provide a competent workforce for the Commonwealth of Kentucky. We’re hoping to be able to attract students through that to come to WKU. We also hope to be able to recruit students who are already at WKU with interest in this to come work at our lab.”

And they’re hoping the XR Research Lab appeals to students who don’t think they’re interested in mathematics or manufacturing.

“Our goal is to really be able to use this as a tool to recruit students who don’t traditionally go into these areas,” Dr. Arbuckle said. “You’ve never had a reason to learn the math that you want to. These students all found a reason to want to learn robotics this summer.”

By working together, learning new skills and utilizing new technology, the students are putting WKU on the cutting edge of industrial manufacturing.

“One of the things that Greg said to me when I first walked into this building,” Simpson said, “was that when these separate disciplines were all together as a group back in the day we referred to it as industrial arts. So here we are 30 to 40 years later back in this building creating an industrial arts program.”