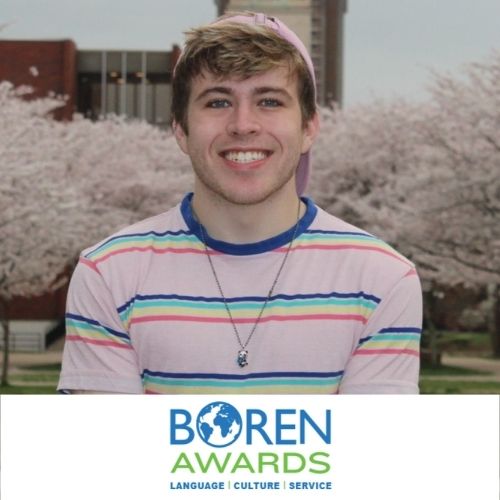 Jayden Thomas, a senior political science and international affairs major from Glasgow, has earned a $25,000 David L. Boren Scholarship to fund intensive language study abroad in the 2021-2022 academic year. It is the latest among a series of nationally competitive scholarships Thomas has earned as he pursues a career in federal service.

A fascination with Japanese popular culture in high school led Thomas to seek out resources related to East Asian cultures at WKU. In addition to pursuing coursework in East Asian politics and Japanese language, he enlisted the help of Office of Scholar Development staff to apply for scholarships to study language abroad. In his second year at WKU, Thomas earned a fully-funded Critical Language Scholarship to study in Japan, as well as Gilman and Freeman-ASIA scholarships to fund his third year abroad at Kansai Gaidai University in Osaka. Unfortunately, the COVID-19 pandemic not only brought him home early from Japan, it canceled the US Foreign Service Internship Program--another nationally competitive opportunity he had earned. Thomas applied again in a different direction, however, and completed a Virtual Student Federal Service internship with the US Consulate in Naha City, Okinawa. In summer 2021, he will be studying in a second Critical Language Scholarship (virtual this time). If travel policy allows, in October 2021 he will start his final undergraduate year abroad in Japan on a Boren Scholarship that will help further pave the way toward a career in federal service.

The Institute of International Education (IIE), on behalf of the National Security Education Program (NSEP), awards undergraduate Boren Scholarships and graduate Boren Fellowships to add important international and language components to students’ education via overseas study in world regions critical to U.S. interests. Since 1994, over 7,000 students have received Boren Awards and contributed their vital skills to careers in support of the critical missions of agencies throughout the federal government. “To continue to play a leadership role in the world, it is vital that America's future leaders have a deep understanding of the rest of the world,” says former U.S. Senator David Boren, the principal author of the legislation that created the National Security Education Program and the scholarships and fellowships that bear his name. “As we seek to lead through partnerships, understanding of other cultures and languages is absolutely essential.”

Thomas worked with Melinda Grimsley in the Office of Scholar Development to conceptualize and refine his Boren Scholarship application. Dr. Grimsley welcomes the opportunity to speak with any students interested in critical language study and federal careers.