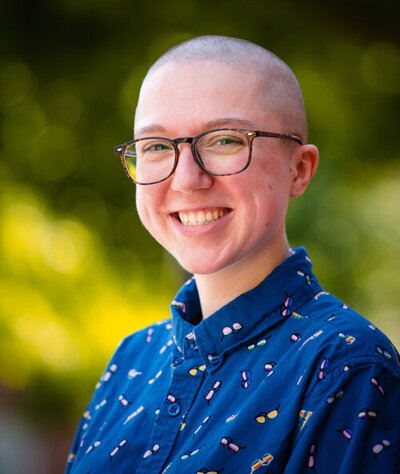 Professional Writing major Max Chambers has secured a job at Synchrogenix as Technical Editor 1. After graduating in May, Chambers will begin the position, and they will use their professional writing skills to edit reports of drug trials to conform to the formatting standards of the FDA. Chambers acquired the job through networking with an alumna, and they negotiated with their employer for a higher salary.

An employee of Synchrogenix, Callie Compton, is a WKU English MA alumna, and she informed the English Department of the job opening. Chambers had connected with Compton previously when Chambers was a Profile Writer for the English Department, so they decided to reach out to Compton for more details about the position. They asked her about the work she does and about what applicants the company was seeking.

Chambers applied for the position online and received an interview with a Human Relations representative. The company then assessed Chambers’s editing skills. In a 15-minute assessment, Chambers completed formatting tasks in Word, and in a 1-hour assessment, they reviewed reports for grammatical and factual errors. Chambers noted that these types of assessments are common hiring practices in the editing field. After the assessments, Chambers received three more interviews with members of the editing team. Chambers was prepared for the interviews because of previous experience. They said that most employers ask similar questions, such as asking what the applicant knows about the company, so applicants can prepare answers ahead of time. Chambers recommended taking a practice interview with the WKU Advising and Career Development Center (ACDC) to gain experience before entering the job market.

Once Chambers was hired, they began the salary negotiation process. “That was scary,” they said. “I am not an assertive person, so I was tempted to just take the salary. But, I’ve always been told that you should try to push for a better salary on your first job. I knew I wanted to push myself and say that I am worth more than what they’re giving.” To learn how to begin the process, Chambers reached out to Dr. Angela Jones and the ACDC. “The best thing you can do is come back with statistics because they cannot argue with statistics,” Chambers said. They presented their employer the average pay of other editors in the state and requested to negotiate that number and the offered salary, and their employer raised their offer. “It wasn’t as complicated as I thought it would be,” Chambers said. “It was awkward, but everyone finds it awkward.”

Chambers became qualified for the position through their experiences at WKU. In their sophomore and junior years, Chambers tutored at the Writing Center and gained editing experience. Chambers also worked for the College Heights Herald as a Copy Editor in the fall of 2019 and as Copy Desk Chief in the spring and fall of 2020. Chambers said they developed their interest in editing when they wrote profiles for the English Department in the spring and summer of 2019. They said, “I think the process of interviewing other people and figuring out how to edit their quotes to where they’re true to what the person said but not rambling all over the place is an art. I think that art is what made me so interested in editing. To negotiate the balance between your own words and someone else’s words when you’re editing and writing is something that I’ve always really loved doing.”

With their WKU experience, Chambers began an internship with KirkpatrickPrice in the summer of 2020. Chambers said the internship “threw [them] into the deep-end of technical writing” because they were not educated in the information security topics the company wrote about. “That’s what showed me that I can apply my English background to literally anything,” Chambers said. “If I have the base skills, I can come into any subject to edit.”

Chambers also discussed the impact of their English courses. “All my courses in the department really broadened my horizons in terms of telling me that English is so much bigger than I understood,” they said. One course Chambers listed was Editing and Publishing. They said they are grateful to have taken the course in their junior year instead of their senior year because the course prepared them for their career. “That course put me a lot further into how the editing and publishing fields worked and how to get a job in them,” Chambers said.

Since Chambers took advantage of many opportunities within the English Department, they wished to share the information they learned through the English Major’s Guide to Graduation, which Chambers created as their Professional Writing Capstone project. The guide intends to help students discover careers they will enjoy and what minors and electives may enhance their education. Chambers said, “I’m really hoping that this guide will help other students because I think that the most important thing to do while you’re here is to maximize every possible opportunity to gain more experience and to feel that you’re applying your degree before you graduate.”