Bendson fills time on the Hill with mentoring, research, and dance 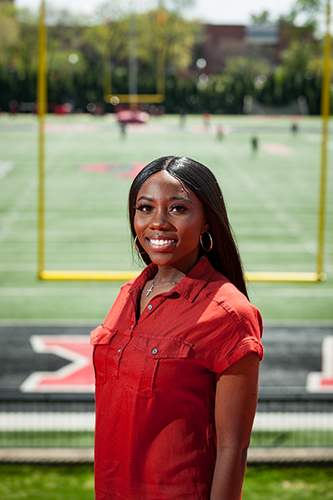 WKU Psychology major Malyra Bendson demonstrated pride and dedication throughout her time at Western Kentucky University, no matter the activity, and will graduate this May with a Bachelor of Arts degree. According to the New Albany, Indiana native, she first fell in love with WKU after experiencing the university’s welcoming faculty and staff and the sprawling beauty of the campus. Not only that, but Bendson visited WKU as an elite dancer and planned to continue her career with the WKU Dance Team. “They had the team just for me,” Bendson said.

From 2018 to 2019, the WKU Dance Team played a major role in Bendson’s life. “Being a part of a collegiate athletic program gave me the opportunity to perform at games, participate in service opportunities, attend a bowl game, and even win a National Championship in D1 Jazz in 2019,” Bendson said. Although a D1 athlete, Bendson still found time to involve herself in various other organizations on campus, including the Intercultural Student Engagement Center (ISEC) and WKU Housing and Residence Life.

“In my senior year, I was able to become an ISEC Navigator, which is a mentor to incoming minority freshman,” Bendson said. “I help students navigate their way through the Hill for the next four years. Duties include help planning course schedules, promoting campus involvement, and helping them adjust to college. I am also a Top and Nichols Scholar for the program.”

Most importantly, Bendson discovered her passion for psychology early in her collegiate career after being exposed to the field during high school. “I chose my degree program because in high school I was influenced by my psychology teacher Ms. Manger. I was always curious about how the brain works and have always wanted to help people solve their problems,” Bendson said.

With her degree, Bendson became involved at the Boys & Girls Club of Bowling Green. Similarly, Bendson also worked at the Barren River Area Child Advocacy Center (BRACAC) through an internship experience with WKU Assistant Professor Dr. Sarah Ochs’ Psychology 390 Field Experience course. Without the field experience course, Bendson would not have had the opportunity to also join Ochs’ research team - which focused on the correlation between curriculum-based measurement and performance on the Kentucky Performance Rating for Educational Progress (K-PREP). “Experiences that I gained from being on a research team is being able to evaluate assessments, input data, and participate in a research conference,” Bendson said.

Despite her active involvement on campus and the surrounding communities, Bendson shared that cheering on the Tops during athletic games were some of her favorite memories on campus. “There was always so much energy in the crowd and I loved being able to cheer on my Hilltoppers along with my friends,” Bendson said. “I believe that The Spirit does make the Master, and I have shown that through the years of being a Hilltopper.”

For more information about earning a degree in psychology, visit https://www.wku.edu/psychology.