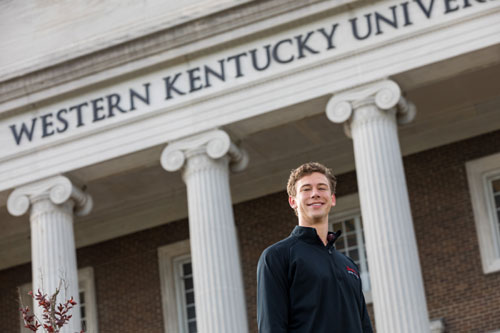 What started as a high school passion – caring for cows on his family’s farm in Barren County - turned into a three-part passion for junior Matthew Wininger.

Triple majoring in Political Science, Agriculture and International Affairs with a minor in Sales, WKU has helped Wininger discover what the intersection of all his passions can be.

His involvement in WKU’s Student Government Association (SGA) has become a significant part of his WKU journey, helping Wininger to combine his interests in communication and the natural world.

Applying concepts from his coursework, Wininger led the Sustainability Committee within SGA to outline three main goals for the future, two of which are already in the process of being completed.

The committee’s first project was to establish a community garden, a goal turned bill that has already passed with unanimous consent. SGA will be directing $1000 towards two raised beds to be constructed in collaboration with the WKU Office of Sustainability. The hope is that these community gardens become a space for hands-on learning that encourages environmental sustainability.

The second goal is to make recycling more accessible for students living off campus. Although this had been an initiative in previous years, Wininger hopes to reincorporate the practice. This bill is an effort to meet the community halfway in encouraging environmentally friendly habits both on and off campus.

As a Bowling Green native that grew up in and around the WKU community, Wininger feels especially connected to these efforts.

“It has been neat to watch campus grow up – and now, to finally be a part of it, is something special,” Wininger said.

Wininger also highlights the Hilltopper Spirit’s influence in his desire to become more involved and make a lasting impact.

“WKU has this community aspect. Together we can use our combined talents and skill sets to create something incredible,” Wininger said.

Wininger worked with WKU faculty and staff to hone his skills, such as Beth Gafford, WKU Coordinator of Resource Conservation, and Dr. Daniel Super, an Assistant Clinical Professor in the School of Teacher Education. Reflecting on their role in his WKU journey, Wininger is thankful for their influence.

“It has been so important to have reliable and dependable mentors as well as someone to just believe in me and what I hope to achieve,” Wininger said.

Reflecting on his experience, Wininger is grateful for the opportunity to chair a committee for the first time. Over the past year, Wininger gained valuable leadership and communication skills. By connecting with individuals around campus, reaching out to the local community, and representing the voices of fellow students in important decisions, Wininger built a strong foundation for future leadership roles.

Looking to the future, Wininger hopes that SGA’s Sustainability Committee can reach additional goals to benefit campus. From applying an adopt-a-highway like concept to the green spaces on the Hill and to installing micro-pantries across campus, the committee has numerous ideas to keep WKU one of the most sustainable campuses in the country.

Building on this foundation, Wininger is excited to contribute to these efforts from a new viewpoint - as the newly elected SGA President for the 2021-2022 academic year.

For more information about the Student Government Association (SGA) at WKU, visit: https://www.wku.edu/sga/

For more information about earning a degree in Political Science, visit:https://www.wku.edu/political-science/politicalsciencenew.php

For more information about earning a degree in Agriculture, visit: https://www.wku.edu/agriculture/

For more information about earning a degree in International Affairs, visit: https://www.wku.edu/political-science/international-affairs/