Cancer survivor prepares for a career in medicine 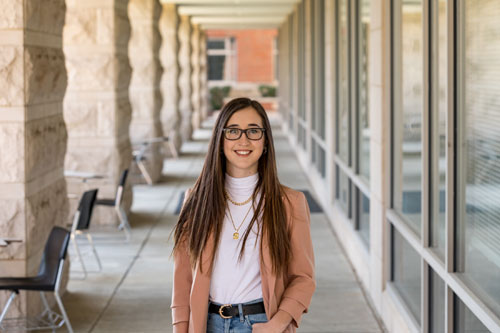 Jordyn Hurley, a senior from Lexington, is earning a double major in physics and chemistry with a concentration in pre-medicine at WKU. As a cancer survivor, she said she knew from a young age that she wanted to pursue a career in medicine.

Having interacted with medical professionals on a frequent basis from the time she was young, Hurley said the physicians she regularly saw growing up became more than just medical providers. They became important role models.

“These physicians have had such a positive impact on my life, and I want to have the opportunity to do the same for others in the future,” said Hurley.

Outside of coursework, Hurley stays involved on campus and in the community. She provides tutoring for students in math and science through the Kelly Autism Program (KAP) Circle of Support, conducts research on nanoparticles, participates in the WKU Dynamic Leadership Institute, and serves as a teacher’s assistant for the WKU Department of Chemistry. She is also a physics ambassador, active member of Alpha Epsilon Delta (WKU’s student organization for pre-professionals), and is an executive member of WKU’s Habitat for Humanity.

Drawn to WKU because of the scholarship opportunities, Mahurin Honors College, beautiful campus, smaller class sizes, and ability to interact with professors, Hurley said the sense of community on campus is one of the greatest benefits of attending WKU.

“Many of the faculty members have gone out of their way to help me find opportunities to further both my academic and professional career,” said Hurley. “The support system through faculty and fellow students has been awesome!”

Majoring in physics for the pre-medicine concentration is considered a less common path, but Hurley said that math has always been her best subject because she loves to problem solve. Majoring in physics allows her to pursue the subjects she is most interested in while making necessary connections between physics and the other sciences required for her future in medicine.

Hurley is in her third year at WKU. The next step in her academic career is to take the MCAT and apply for medical school. She is considering a career in cancer research and leaning towards pathology which is more focused on lab work and research.

“During my time here [at WKU], I have found a love for teaching and tutoring,” said Hurley. “I really enjoy that aspect of working, so I am also considering a career in teaching medical students.”

As Hurley moves forward in her field, she said she will continue to embody the Hilltopper Spirit.

"It’s about perseverance, pursuing your goals, and seeing what’s ahead without giving up,” said Hurley. “It’s having a community mindset, and helping one another achieve their goals.”

For more information about the Ogden College of Science and Engineering, visit: https://www.wku.edu/ogden/.

For more information about a major in Chemistry at WKU, visit:https://www.wku.edu/chemistry/.

For more information about a major in Physics at WKU, visit: https://www.wku.edu/physics/.