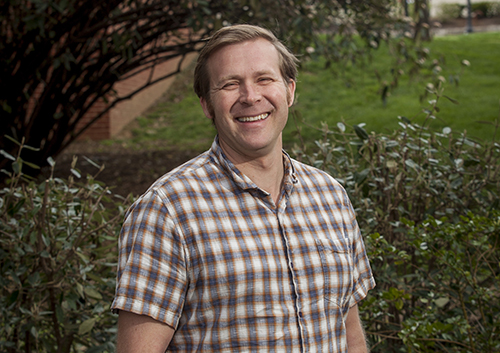 WKU biology professor Noah Ashley has been awarded a three-year, $429,768 R15 grant from the National Institute of General Medical Sciences (NIGMS), one of the 27 institutes and centers of the National Institutes of Health (NIH), to continue research that investigates how stress is involved in regulating the inflammatory response to sleep loss.

“This research evaluates the mechanisms that lead to inflammation from sleep loss. One of those mechanisms involves stress,” Dr. Ashley said. “In the past year, the pandemic has caused stress in all of our lives. It’s also affected our quantity and quality of sleep. So this research is incredibly relevant today.”

Congressman Brett Guthrie announced the grant Friday afternoon. “I’m thrilled the National Institutes of Health has chosen to fund research at Western Kentucky University that could potentially be used as a foundation for treatments for people who experience inflammation due to sleep loss,” said Guthrie. “We have the best environment in the world to promote scientific research and support scientists like Dr. Ashley in their important work. I currently oversee the NIH in my senior role on the Energy and Commerce Committee, and I’m a strong believer in supporting research that can lead to innovative treatments and cures. I wish Dr. Ashley and his team good luck on this multi-year research project.”

The project’s premise relates to the worldwide increases in obesity that have led to a higher incidence of obstructive sleep apnea, which is characterized by recurring events of airway collapse during sleep, intermittent low oxygen levels and fragmented sleep.

“Chronic inflammation can have a huge impact on someone’s life by increasing the risk for development of cardiovascular disease, diabetes and cancer,” he said. “If we can understand how inflammation arises from sleep loss, then potential therapeutics could be developed to mitigate inflammation in patients who experience dysregulated sleep, like obstructive sleep apnea.”

Various forms of sleep loss can trigger the classical stress response, which involves rapid activation of the sympathetic nervous system to produce catecholamines as well as release of glucocorticoids into the bloodstream, which are key stress hormones of the body. Dr. Ashley’s previous R15 funded-research identified the importance of the sympathetic nervous system in mediating this inflammatory response to sleep fragmentation.

In this project, Dr. Ashley’s research will examine the role of stress hormones in regulating inflammation from sleep fragmentation by manipulating hormone levels in mice that have experienced rates of sleep loss similar to patients with obstructive sleep apnea. Evaluating the mechanisms that regulate the inflammatory response could lead to new drug development pipelines for patients suffering from disrupted sleep.

WKU undergraduate students will be highly involved in the NIH-funded project. In the previous grant, 15 WKU students were trained to conduct biomedical research. Collaborators on the project include Dr. Bruce O’Hara and Dr. Andrew Morris from the University of Kentucky.

The National Institute of General Medical Sciences (NIGMS) supports basic research that increases our understanding of biological processes and lays the foundation for advances in disease diagnosis, treatment, and prevention.