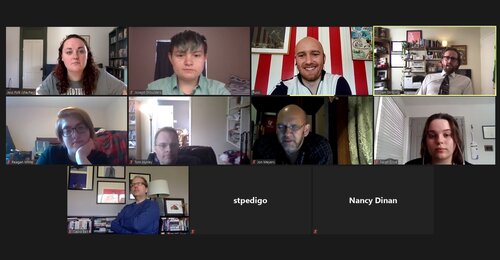 On Tuesday, March 16, R.K. Nickel and William Stribling met with members of the WKU Department of English on Zoom to discuss screenwriting. The visiting writers described the projects they have worked on and offered advice to creative writing students on writing and the film industry.

R.K. Nickel and William Stribling are scriptwriters who have worked on TV shows, films, video games, and apps. Nickel and Stribling frequently collaborate on projects. They co-wrote the comedy film Bear with Us and the comedy/sci-fi series Stellar People. In addition, Nickel writes short stories and worked on episodes of the DUST Horizons podcast, and Stribling directs films such as Lies I Told My Little Sister. They are currently working together on another film and a narrative-led video game.

Nickel described having a co-writer as a “freeing experience,” and he recommended for students to try it. The screenwriters shared their co-writing process. First, Nickel and Stribling work together to come up with ideas and to create a story outline. Stribling said that most of the work occurs before writing the script through planning and thinking. Then, one person writes the first scene, and the other person revises that scene and writes the next one. The first person revises the previous scenes and adds another, and the cycle continues until they have a completed draft. The screenwriters noted that they do not always agree on each other’s changes, but they cannot revert to the original version; they must find a third option in order to address both people’s concerns. Once they have a draft, they read the script aloud repeatedly—ideally once in a table read with professional actors—and revise each round until the dialogue flows well.

Nickel and Stribling advised the students to research the structure of stories, a topic they teach often in their classes. They stressed that structure is not a limiting formula; it helps writers develop a story. Nickel said, “Structure is thousands of years of storytelling distilled.” Stribling recommended these resources: Writing Movies for Fun and Profit, Save the Cat, Writing the Picture, and The Hollywood Standard.

The conversation then opened for questions from the attendees. One student asked how the screenwriters obtained funding for their indie films. Stribling described how great content can be created on small budgets and how the writers often limit themselves in number of scene locations and characters. Nickel discussed the importance of networking. For their first film, Nickel called many people that he knew who were in the industry. He told the students that networking is not as intimidating as it sounds. “Networking is just a professional word for having friends,” Nickel said. He reframed the idea as making friends with people one enjoys working with. Nickel and Stribling also advised the students to be open to all opportunities. In between the production processes for their films, Nickel and Stribling are always working on individual projects. Nickel encouraged the aspiring writers and said, “If you have the willpower, you can make anything happen.”