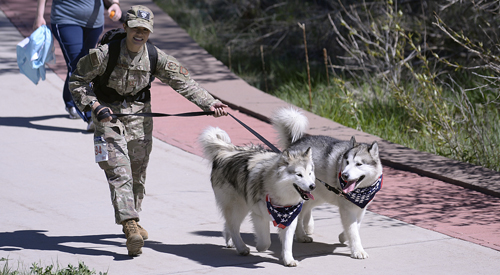 WKU Organizational Leadership Master’s student Erica Materkowski never thought she would remain in the military after her commitment to ROTC ended.

During her undergraduate career, Materkowski studied chemistry and biology and participated in the ROTC Air Force program to pay for schooling. Due to her educational background, she was assigned as a Space Officer in 2013 after her tenure in the Air Force was complete.

When Space Force was established in 2019, the Eugene, OR., native knew remaining in her current career was the logical next step for her family due to the expanding field and explosive growth opportunity. The next year, Materkowski became a Space Force Guardian.

“A day in the Space Force really varies depending on what job you have. Right now, I’m focused on training others about my service so I’m looking at lesson plans, courseware and space integration,” Materkowski said. She emphasizes that her role goes beyond just internal education as she hopes she can also teach others about the importance of space and its capabilities from a civilian perspective.

“Things like GPS, social media, ATMs, and cell phones, you name it - there’s most likely a connection to a space capability,” Materkowski said. “So much of our society relies on space without even knowing it. If that domain is threatened, it can jeopardize our modern way of life. For me, educating others about what is in the space domain is important.”

Leadership opportunities are a natural part of the military’s rank system, but Materkowski found that the skills she learned during her time in Space Force are better applied once she pursued a master’s degree in Organizational Leadership from WKU.

“The leadership lessons I’ve learned at WKU will be with me for my entire career. Emotional intelligence, authentic leadership, coaching, servant leadership, and transformational leadership are just some of the things that I think about in every aspect of my job.” Materkowski said.

With the new service and the rapidly evolving atmosphere, literally and figuratively, Materkowski feels confident in her ability to pivot and guide her correspondents with the lessons learned at WKU. “I really soaked up all the courses and enjoyed each one,” Materkowski said.

Materkowski’s favorite part of her career is that the Guardians are encouraged to provide input in the program’s future; however, she acknowledges the uncertainty of what that future may look like.

“When we used to think of space, we thought of it as a benign environment, but now we have adversaries trying to deny us the use of space capabilities. If those adversaries succeed, their actions could change modern day life as we know it.” Materkowski said.

For now, Materkowski and her husband are happy to remain in this pocket of the atmosphere where they enjoy hiking, and renovating their homes, with their Alaskan Malamutes in tow. “I personally don’t have interests to go into space right now. My husband is a special operator, so having two people in dangerous career fields might be madness for our family,” Materkowski said.