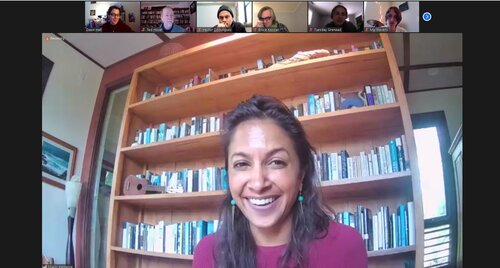 On Thursday, February 18, filmmaker Shalini Kantayya met with WKU students on Zoom to discuss her film Coded Bias. The WKU Gender & Women’s Studies Department hosted a watch party of the film a week before the event. Around 50 people attended the post-screening conversation. The event was co-sponsored by the WKU Departments of English and African American Studies.

Shalini Kantayya is a critically acclaimed filmmaker best known for her debut film Catching the Sun, which was named a NY Times Critics’ Pick and was released on Netflix on Earth Day 2016. Kantayya is also a TED Fellow, a Fulbright Scholar, and an Associate of the UC Berkeley Graduate School of Journalism. Her second feature-length film, Coded Bias, premiered at the 2020 Sundance Film Festival. During their annual trip to Sundance, a group of WKU Film students, Dr. Dawn Hall, and Dr. Ted Hovet attended the premier and listened to Kantayya’s discussion of the film.

Coded Bias explores the uses and shortcomings of facial recognition and algorithmic technology. The documentary follows the work of MIT Media Lab researcher Joy Buolamwini, who discovers that the leading facial recognition software does not accurately read dark-skinned faces. This prompts her to research the implications of this bias in a society increasingly reliant on artificial intelligence. The information revealed that AI reproduces the systematic inequalities of the past and that no laws regulate the processes. The documentary ends with Buolamwini speaking at the Capitol to push for the first legislation to regulate bias in algorithms.

During the post-screening conversation, WKU students asked Kantayya about the subject matter and the creation process of Coded Bias. Kantayya described her goal for the film to spark a conversation of ethics and AI. “I hope the film gives a form of literacy on algorithms,” she said. “You do not have to have a doctorate to stand against Big Tech that affects us all.” Kantayya also wanted to provide resources to support the cause, which are listed on the film’s website www.codedbias.com.

The students were grateful for Kantayya’s cultural discussion and film advice. Senior Bailey Cooke shared her thoughts on the event. She said, “The issues and themes highlighted in Kantayya's documentary are not only relevant to American culture but to college students, especially as we are a generation that is keen on being up-to-date on the latest technology. Having Kantayya virtually come to campus localized the discussion her film facilitates, and I was grateful to see over 50 people turn out to contribute, listen, and learn.”